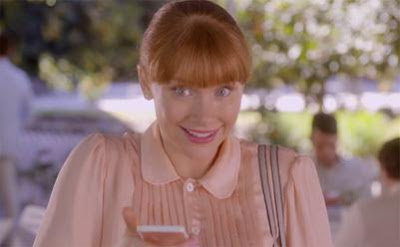 I have a recommendation for those who have not yet tuned into the Black Mirror series on Netflix. You should! For those not familiar with Black Mirror, here is what Wikipedia has to say about it:

Black Mirror is a British science fiction anthology television series created by Charlie Brooker, with Brooker and Annabel Jones serving as the programme's showrunners. [Black Mirror] centres on dark and satirical themes that examine modern society, particularly with regard to the unanticipated consequences of new technologies.

The image above is from Episode #1 in Season #3, "Nosedive." This episode was a pretty compelling picture of how our society would look if we took seriously all those social media "likes." In the world portrayed in "Nosedive," a person's ability to participate meaningfully in society depends on the "score" that he or she has received from those persons with whom he or she has interacted. Those "likes," or "dis-likes," add up. Every interaction gets a score from 1-5, and if your overall score is too low, you won't even be able to rent a car, must less move into the gated community of your dreams.

As it turns out, the "Nosedive" world may already exist ... in China. Here's a report from The Wall Street Journal:

Apple CEO Tim Cook looks forward to a “common future in cyberspace” with China, he told the Chinese government’s World Internet Conference earlier this month. This was an embarrassing gesture toward a state that aggressively censors the internet and envisions a dystopian future online.

The experience of lawyer Li Xiaolin may give a taste of what that future looks like. During a 2016 work trip inside China, he tried to use his national identity card to purchase a plane ticket. To his surprise, the online system rejected it, saying he had been blacklisted by China’s top court. Mr. Li checked the court’s website: His name was on a list of “untrustworthy” people for having failed to carry out a court order in 2015. He thought he had resolved the issue, but now he was stranded more than 1,200 miles from home.


The main character in "Nosedive" had problems getting on a plane, too.

What Black Mirror tells us is that our modern technologies may, indeed, have dark consequences. One good reason to watch Black Mirror is to help inoculate oneself against the glittering promises that our new technologies advertise. That iPhone X, with its powerful facial recognition capabilities, may not be such a wonderful invention, after all!

I have a hunch we may get a look at why facial recognition isn't such a good idea in some future Black Mirror episode!