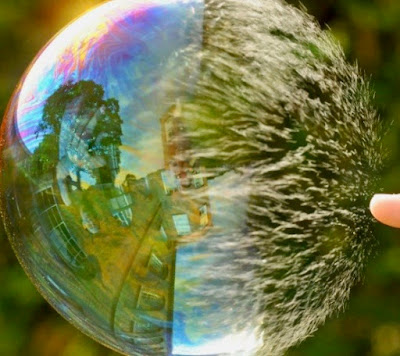 Desmond Lachman, who seems to have significant credentials as a member of the economic and financial elite, asks this question in a New York Times' column published on December 14, 2017: "Are We In Another Bubble?"

If you click that link, you'll see a different headline on the column, but the "Are We In Another Bubble?" question was definitely being posed by the headline in the hard copy version I read. Lachman's column suggests that we ARE in another "bubble," and a bigger bubble than ever before. The way he sees it, another crash is on the way:

Are we about to make the same mistake? All too likely, yes. Certainly, the American economy is doing well, and emerging economies are picking up steam. But global asset prices are once again rising rapidly above their underlying value — in other words, they are in a bubble.

We all, undoubtedly, remember the last time around, which wasn't that long ago. In 2007-2008, residential real estate was the main category characterized by "asset prices ... rising rapidly above their underlying value." Our current situation is even worse, and other asset categories are now implicated (read the column to find out why Lachman thinks so), but it can't be disputed that the prices now being paid for residential real estate are, as in 2007-2008, vastly greater than the "underlying value" of the homes being bought and sold.

Given that a crash is on the way, I have a proposal for something our government can do when the residential real estate bubble finally, and inevitably, does burst. In a way, my first thought is that our national policy should simply be to let the speculators lose. Let the banks and those other financial institutions that have promoted the speculation go bankrupt.

It's a nice thought, but I think that is an unlikely scenario. While he and I might not like it very much, Ry Cooder is pretty much "on the money" when he opines that no banker will ever be left behind. If you don't know the song, you can listen right here, by clicking to view the video below. At the end of the video, you'll see pictures of the kind of residential real estate left behind, after the last bubble.

Here's my idea: The title to all of those houses went to the banks, after the crash, because the homes were the "security" for the inflated loans that the banks made, pumping the bubble ever bigger. After the crash, the United States government bailed out the banks (and the bankers, personally), but those assets stayed with the banks. Next time, when we bail out the bankers once again, the government should take title to all those foreclosed homes, and sell them back to their former owners for a price that the owners can actually afford, and sell them back with a "resale restriction" that will keep the price down to what an average or below average income person can afford.

If that were done, the government would end up creating perhaps millions of permanently affordable homes, which would not longer be speculative assets, but which would simply be homes available on the market at affordable prices.

This is not, really, a radical idea, and it sure would help us out with our affordable housing crisis, a  crisis caused, in many ways, by the speculative bubble that we know is going to burst....