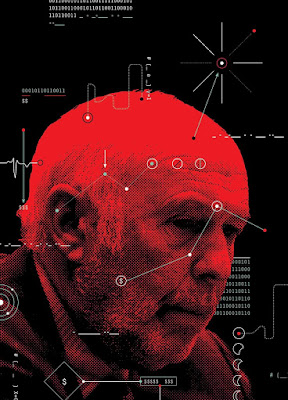 I teach a Legal Studies course called, "Privacy, Technology, And Freedom." One of the most important topics addressed in the course is the way "Big Data" is being used to impact politics. Anyone wanting a quick introduction to this topic is invited to click on the following link, to read an excellent article by Zeynep Tufekci.

The December 18 & 25, 2017, edition of The New Yorker ran a profile entitled, "The Numbers King." Jim Simons is a mathematician and hedge fund manager, and he is the subject of the profile. Simons is fabulously wealthy, with his income, last year, being $1.6 billion dollars. That figure is not assets; that is Simon's annual income. Most of the assets, apparently, are sequestered far from the reach of the United States Internal Revenue Service.

Before I read the article, based on a quick scan of the first page, I thought it might be a kind of follow-up to the Tufekci piece, since a heading summarized the article with this description: "Algorithms made Jim Simons a Wall Street billionaire. His new research center helps scientists mine data for the common good." Algorithms are what makes it possible to release the power of "Big Data," which is why I was particularly interested in how the "computational science" being supported by Simons might relate to the "computational politics" that Tufekci analyzes.

As it turns out, the article is largely focused on issues relating to philanthropy, and not so much on the various algorithms that Simon's nonprofit research center, The Flatiron Institute, is helping to develop and deploy. Ray Madoff, who runs the Boston College Law School Forum on Philanthropy and the Public Good, put her concern about what Simons is doing this way: "The rich are running things, and we're just visiting their world."

Rob Reich, a professor of political science at Stanford University, and an expert on philanthropy, is quoted as follows, along the same lines:

Private foundations are a plutocratic exercise of power that’s unaccountable, nontransparent, donor-directed, and generously tax-subsidized. This seems like a very peculiar institutional and organizational form to champion in a democratic society.

The algorithms being developed at The Flatiron Institute are currently being utilized to understand human biology, and the structure of the physical universe. There are three active divisions of the Institute: computational biology, computational astronomy, and computational quantum physics. More divisions (at least one, anyway) will soon be added.

I was disappointed, in one way, that "computational politics" were not mentioned in the article, but I was certainly not disappointed by what D.T. Max, who authored the Simons' profile, had to say about philanthropy. Finding ways to develop and use computer algorithms to "expand knowledge," and to "help humanity," which are the goals that Simons says he is pursuing, is certainly a worthwhile enterprise. But who is in charge of these efforts is pretty important.

Only slightly mentioned was Simons' friend and hedge fund partner, Robert Mercer, who recently stepped down from his management position at the Simons' firm, Renaissance Technologies. Mercer is a person, you might recall, who is providing major funding for alt-right media and the political efforts of Steve Bannon and our current president, Donald J. Trump.

If we don't want, in the future, to have to beg for a "visitor's pass," to visit the world of the rich, we will need to put democracy back in charge of the algorithms that, more and more, create the realities we inhabit.