#355 / The Strange Wisdom Of The Third Person 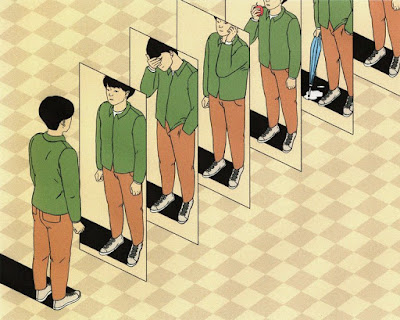 Ben Dolnick asks a question: "Is Donald Trump inadvertently displaying signs of enlightenment?" Dolnick answers his own question, too: "Ben highly doubts it."

This internal rumination about the enlightenment (or not) of our current president is found in a column that was published in The New York Times. Online, the column is titled, "Donald Trump, Accidental Buddhist." In the hard copy edition of The Times, Dolnick's column bore the same title as this blog posting, "The Strange Wisdom of the Third Person."

I enjoyed Dolnick's speculative venture into literary analysis, suggesting that speaking about oneself in the third person may be a reflection of the type of "non-attachment" that Buddhism suggests we all should strive for.

This is, actually, a philosophical point worth considering. "Non-attachment," in my opinion, is a very good thing. If we can nudge ourselves into non-attachment by the language we use, we might want to try that third person formula.

In the case of Mr. Trump, however, I'm pretty sure that Dolnick is right. Our current president's habit of speaking about himself in the third person doesn't evidence "enlightenment." All it represents is his well-documented narcissism, pushed to its literary limits.