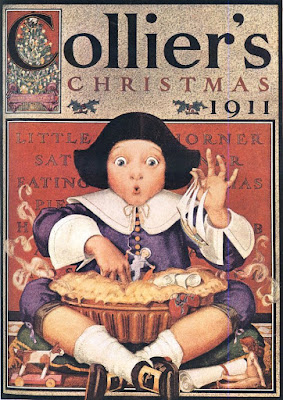 Little Jack Horner sat in a corner eating his Christmas pie. He stuck in a thumb and pulled out a plum and said, "What a good boy am I."

This well-known nursery rhyme is actually a commentary on the England of King Henry VIII. Who knew? Well, probably lots of people knew, but I didn't. You can get an explanation of the "Little Jack Horner" nursery rhyme by clicking on this link. That will take you to a transcript and an audio file of an interview on NPR's All Things Considered, "The Reason Behind The Rhyme."

I made this discovery about "Little Jack Horner" as I pursued another topic entirely. I regularly read The Washington Post, online, and I have always cringed, internally, when I come upon one of its regular columns, "The Plum Line."

I don't cringe because of the content of the column, which is largely focused on critiques of contemporary politics. I mostly agree! It is the title of this column that has always driven me crazy, because I have regarded the title as reflecting an illiterate reference to the real expression, which is "plumb line."

In fact, as my admittedly brief, browser-based research reveals, there is no such expression as "the plum line," at least in accepted usage. The proper expression is, as I thought it was, "the plumb line," and that refers to a tool used in construction, a tool I have had occasion to use in my admittedly limited past forays into carpentry.

A "plumb line" gives a line that is straight and truly vertical.

Would that our government were straight and true as well, instead of being driven by the pursuit of "goodies" that might be pulled from the pie of our pernicious politics.

My research has served to alleviate my cringing reaction to the title of the Post's column, and only because I happened to run across an explanation of the "Little Jack Horner" nursery rhyme as a byproduct of my research.

My research effort on "the plum line" was to prove to myself that this expression was bogus and illiterate, but I have now decided that a column called "The Plum Line," focusing on contemporary politics, may be "on target" after all. The way I see it now, the title represents a very subtle commentary on the degeneration of our government and politics today. What should be a search for a "true" line has become a search for personal and special advancement, at the expense of our society as a whole.

Hats off to The Post for highlighting, ever so subtly, that uncongenial truth!