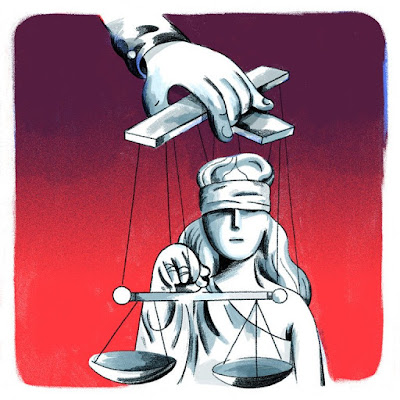 "Don't criminalize politics." That is the plea of Alan Dershowitz, in an opinion editorial appearing in The New York Times on November 29, 2017.

Dershowitz is a well-respected legal and constitutional scholar. I think he's right. It doesn't take long to read his column, and I commend it to you.

Dershowitz contends that "elastic criminal laws should not be stretched to cover Mr. Trump’s exercise of his constitutionally authorized power... An overly flexible, easily expanded criminal statute is a loaded weapon capable of being fired by zealous prosecutors at almost any target. It’s time to store the weapon until it is really needed — and not the next time someone wants to wound his political enemies."

I want to highlight a point not specifically mentioned by Dershowitz, though certainly alluded to in his column. If, when we think that our elected officials are doing a bad job, we conclude that their derelictions should be addressed by criminal proceedings, we are essentially suggesting that we should let "somebody else" take care of our political problem. There is a large, stand-alone bureaucracy that prosecutes criminal violations. Citizens stand by and observe; they don't prosecute the violations themselves.

Our politics MUST be based on an engaged citizenry. To the extent that we see ourselves as "observers," and "spectators," urging others to take action, we depreciate the long-term prospects for genuine democracy, and for the continuance of democratic government. Dershowitz alludes to this issue when he says, "the proper place to litigate the wisdom of [governmental] actions should be at the ballot box, not in the jury box."

I want to make it explicit. We must be political actors, not political observers. We can't wait around for someone to prosecute the malefactors criminally. This is our government - it is a government "of, by, and for the people," right? If that is right, then we shouldn't be expecting governmental prosecutors to handle our political mistakes. We need to take care of those ourselves.