#345 / Read The Short Version To Get The Message 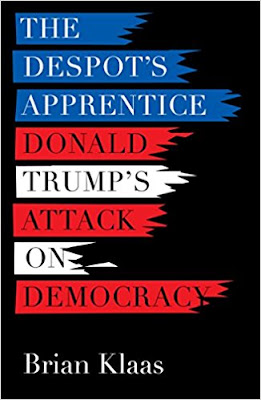 You don't have to read the whole book, to get the main points. Thanks to Alternet, you can read a relatively short and very good synopsis of the The Despot's Apprentice, written by the author himself.

I suggest you read it.

Brian Klaas is a Fellow at the London School of Economics, and he goes out of his way to disavow what he obviously considers excessive claims that the election of Donald Trump means that we have "lost" democracy:

Trump is no Mussolini or Hitler, no Stalin or Castro. Anyone who makes those comparisons is an alarmist, belittling the suffering of millions at the hands of those tyrants. Trump is hardly an evil mastermind. Instead, he is a democratically elected leader, operating within the confines of one of the world’s most stable and robust democracies. His behavior is constrained by democratic institutions, and his decisions are scrutinized by a robust and free press. Even if he wishes it were otherwise, Trump cannot rule by decree.

On the other hand, Klaas is giving us a "heads up" that our democratic political institutions are not safe from failure:

The final roadblock to despots is the people. American-style checks and balances are not imbued with magical powers—they are only as strong as those who deploy them when democracy is under duress. Physically, the US Constitution is no more than ink on a piece of parchment. People, not institutions or documents, protect democracy. If the citizenry allows democracy to wane, it will.

Let's not forget it!