#324 / Sleep And The Two Worlds Hypothesis 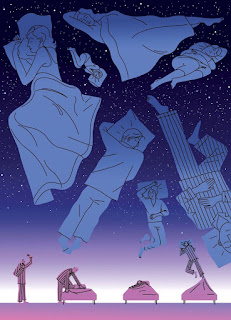 A recent edition of The New Yorker had an article titled, "The Secret of Sleep." Online, that singular "secret" became a plural "secrets."

Both the online and the hard copy versions of the article reviewed two recent books about sleep. The reviewer was Jerome Groopman, who is a Professor of Medicine at Harvard Medical School. I was particularly struck by what Groopman said about one of the books, Wild Nights, authored by Benjamin Reiss, a professor of English at Emory University.

Reiss says that the "guiding spirit" of his inquiry into sleep, and the book's "lead witness," is Henry David Thoreau, who apparently suffered from insomnia. Thoreau's retreat to Walden Pond, according to Reiss, was "driven by a desperate need for rest."

Groopman's review said something else that attracted my attention:

Reiss believes that we are victims of “the same environmentally devastating mind-set that Thoreau decried: an attitude of dominion over nature (including our own bodies) through technology and consumerism.”

My "Two Worlds Hypothesis" urges us to remember that the World of Nature is a world upon which we are ultimately dependent, and that our idea that we are the "masters" of Nature is based an erroneous premise. We are (or can be) masters of the world that we create, but we will always be "creatures," not "creators," in the Natural World into which we have been so mysteriously born.

This way of thinking provides us with a critically important understanding of our place in the world. It may even be, if Reiss is right, that giving up our idea that we should have "dominion over nature" is our best chance of getting a good night's sleep!