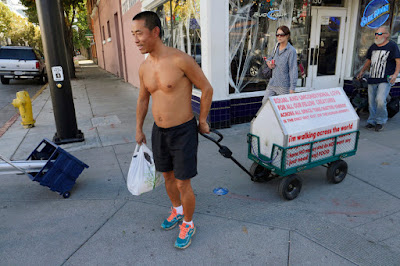 Pictured is Bing Bing Li, photographed as he walks along Santa Clara Street in downtown San Jose. I read about Bing Bing in the November 1, 2017, edition of The Mercury News. Bing Bing is "walking around the world," pulling a cart with the message he is hoping that his journey will communicate:

Equal and unconditional love for all our fellow creatures across all/space/time/matter/energy is the only way out (of the human misery).”

Bing Bing isn't taking money, and he expects to be on his pilgrimage for the rest of his life. While we might sympathize with his message, which does seem rather "on target" to me, Bing Bing is clearly "insane," right? How could what Bing Bing is doing achieve what he wants to achieve? I, personally, don't see how the means chosen by Bing Bing will lead to the end he is seeking. However, I also have another thought.

Want to talk about what's "crazy," or "insane?" We have all heard the popular definition of insanity:

I think Bing Bing has a lesson for all of us.

We had better do something new (and soon) or it's going to be "game over" for the human race.