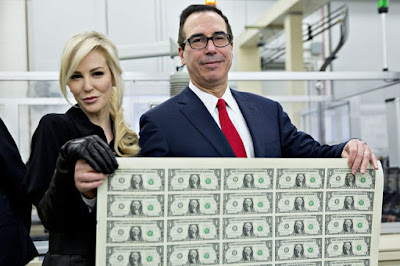 The image above graced the top of the Opinion page in the November 17, 2017, edition of The New York Times. It depicts Treasury Secretary Steven Mnuchin and his wife, Louise Linton, showing off the first press run of money with Mnuchin's name on it.

Reading the message conveyed by the picture, these exemplars of the extremely rich are telling the American people, "your money belongs to us." This isn't just a "symbolic" statement, either. As The Times' editorial accurately reported, commenting on the tax "reform" bill that is currently progressing at breakneck speed through the Congress, a bill strongly supported by Mr. Mnuchin and his boss, the President of the United States:

This bill would take money from working families and give it to the world's wealthiest people.

If it's "our" government (and I mean if our government actually belongs to those not in the "billionaire class"), then we need to take back power from the billionaires.

Wealth is collectively created. A government of, by, and for "the people," can decide how to raise and spend money, and if the disproportionally rich have seized governmental control, diverting the collective wealth of society to themselves, then we (the non-rich, ordinary folks) need to regain control, and realign the paradigm.

The Times says this picture shows these representatives of the current administration as "cartoonishly evil." A column in The Washington Post says they look like "a pair of Hollywood villains."

Frankly, these folks don't just "look like" villains. They're the real thing. And whether we like it or not, the James Bond role falls to us!