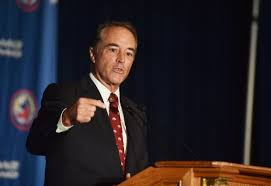 Chris Collins is a Republican Congress Member from New York. That is Mr. Collins, pictured above.

Mr. Collins was in favor of "haste." Here's how he put it:

“Slow down” is the last thing that supporters of the Republicans’ proposed tax overhaul want to hear. “My donors are basically saying get it done or don’t ever call me again,” Chris Collins, a representative from New York, said last week.

According to the way we like to think about it, Members of Congress are elected to represent voters. If Mr. Collins had said, "voters," or "constituents," his statement would have been unexceptional. However, Mr. Collins said, "donors," and in doing so, he made quite clear whom he represents. He represents those guys with money (and that specific subset of those guys with money who have given some of that money to Mr. Collins).

Of course, no one is surprised. The "way we like to think about it" is not the way we really think it is. I doubt too many of Mr. Collins' constituents, reading the article, phoned him up to complain. Of course, they should have, but I doubt they did.

The takeover of our political system by the monied interests (the "billionaire class" as my favorite candidate for president last year likes to say) has discouraged the political participation that is the essence of self-government.

The only antidote to the kind of politics practiced by the Chris Collins of the world (and there are a lot of them, and some of them have a "D" after their names, too), is to mobilize the voters, the people to whom our Members of Congress are actually supposed be responding.

Let's not get discouraged. Let's remember that well-known maxim of politics I mentioned last Saturday:

Don't Get Mad. Get Even!

Voters in New York's 27th Congressional District should say, "goodbye" to Chris Collins! He is selling out his constituents for the guys who give him money.