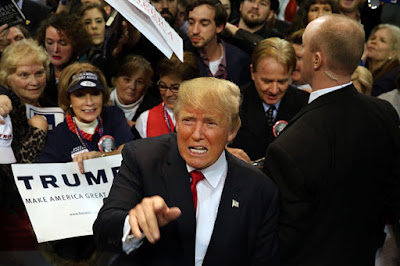 A recent commentary by Robert Reich caught my attention. I read it on Sunday morning, in the San Francisco Chronicle. Reich's commentary was titled, "Trump puts his selfish aims above the nation's best interests." The column documented our president's efforts to have the FBI and the Justice Department investigate the alleged crimes of Hillary Clinton.

Here is Reich's take on this effort:

By calling on the Justice Department to investigate Hillary Clinton, and lamenting he cannot do “the kind of things I would love to be doing,” Trump crossed a particularly dangerous line.

In a democracy bound by the rule of law, presidents do not prosecute their political opponents. Nor, until now, have they tried to stir up public anger toward their former opponents.

Our democratic system of government depends on presidents putting that system above their own partisan aims.

As Harvard political scientist Archon Fung has noted, once an election is over, candidates’ graciousness to one another is an important demonstration of their commitment to the democratic system over the specific outcomes they fought to achieve.

This helps reestablish civility and social cohesion. It reminds the public that our allegiance is not toward a particular person or party but to our system of government.

Of course, there is no legal requirement that a victorious candidate demonstrate "graciousness" to the defeated candidate. That is just the way it is normally done. As we all know, though, the statements and actions of our current president almost never exemplify what decent people "normally" do.

I was struck by how Trump's efforts to put his former opponent in jail demonstrate what I have always called the "Sore Winner Syndrome."

I am not the only one who has identified Trump as a "sore winner." Salon ran an article on the phenomenon last year. It's worth reading. The point Salon makes is that it wasn't enough for Mr. Trump that he won. He wants those who voted for his opponent to "stop opposing him."

I have been writing in this blog about how our politics must be "based on division," even citing Niccolò Machiavelli for that proposition. In other words, we need to acknowledge that we are, and remain, a nation that is composed of people with different views and different interests, yet all committed to a system that allows us, on a regular schedule, to decide what we should do, collectively, given our differences.

The "sore winner" syndrome, in which the winner wants everyone else to stop opposing the winner's views and programs, is a recipe for autocracy, not democracy.

And that's where we are right now, with our never-gracious president, who wants to recognize no will but his own.

Luckily, the nation as a whole does not seem to be too impressed!