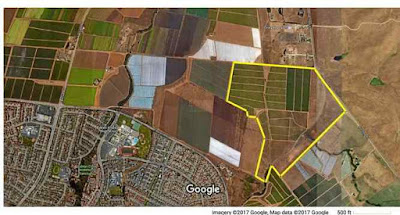 The Matsui family has given a gift that is reportedly worth $20 million to Hartnell College, which is located in Monterey County. Read all about it right here, in a story from the Monterey Herald. You can see the gift, outlined in yellow, in the picture above. The gift to Hartnell is 215 acres of prime Salinas Valley farmland. The estimated market value of the land, that $20 million figure, is based on the idea that the land will not continue to be farmland, but will be converted to development.

Well, if the Matsui family owns adjacent land, the development of the land they have now given to Hartnell would boost the value of their own, adjacent property. If that were true, and it would be easy enough to check this out, by consulting the Assessor's records, the gift of this land to Hartnell would derive from a mixed motive.

Schools and colleges are often used by wily landowners to "pioneer" a new area for sprawl. The Monterey County Local Agency Formation Commission, or LAFCO, is supposed to stop sprawl, and LAFCO will ultimately decide whether or not to allow the annexation of this land to Salinas, leading to its subsequent development. LAFCO is a body that is composed of political officials, and LAFCO members would probably be swayed by an appeal from Hartnell, which could point to the public benefit of letting the college gain an annexation approval that would let it develop the land. Query whether a private landowner would get the same treatment.

Without any reference, however, to what may have motivated the Matsui family's gift, careful consideration should be given to whether or not this land should be annexed to Salinas for development. All involved in the future decisions that will determine the fate of this land (and that definitely includes Monterey County and Salinas voters) should think long and hard about what the annexation and development of the gifted land would mean for the future of the community. This gift comes with a twist!

If the land is allowed to be developed, that will mean more money to the landowner and the developer, and if the landowner is Hartnell College, that money will be used to support local education. That's a plus! On the other hand, development of the land will also help undermine the long-term viability of the county's biggest industry, agriculture, and will lead to more water supply/seawater intrusion problems, more air pollution, more traffic, and more demand on scarce public resources.

LandWatch Monterey County, a nonprofit organization that is trying to preserve and protect the environment, and to support good land use policy, has noted that more Salinas sprawl is NOT a good thing for the long term future of Monterey County.

Not for most of the public anyway, with landowners and developers excepted!