#311 / It Is Time For A Truly Transformative Politics 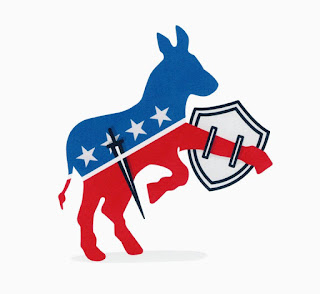 On October 29, 2017, The New York Times published an Op-Ed by Michael Tomasky. His piece was titled, "The Silence of the Democrats."

It is Tomasky's view that the Democratic Party must step up and advocate for the future of "the Western democratic project." By that he means, as far as I can tell, the continued preeminence of the United States and its European allies in all thing affecting the world. He wants to ensure the continuance, in other words, of the global dominance of the Western democracies, as established under the leadership of the United States after World War II.

Tomasky is worried that the United States is backing away from its global responsibilities, and he lauds former president George W. Bush for his recent warnings that the United States might be tempted to "turn inward," and to forsake its role in running the world. The result of such a withdrawal from the "democratic project" is likely to be, Tomasky says, "its erasure in favor of a reactionary, authoritarian alternative."

There is undoubtedly some truth in the point that Tomasky is making, but post-9/11, President Bush had the United States embark on massive military interventions everywhere, and specifically in the Middle East. President Obama continued, and in some cases expanded, these military involvements. It appears that President Trump is doubling down on that strategy, despite his statements, during the 2016 campaign, that the United States should look to its own problems, and let other nations shoulder more of the burdens involved in shoring up what Bush called "The New World Order."

I'm not sure that's how Tomasky sees it. It looks to me like that "democratic project" he is so afraid we're losing is, essentially, the continued domination of the entire world through the military might of the United States.

That is not, in my view, the transformative politics we must work to create!