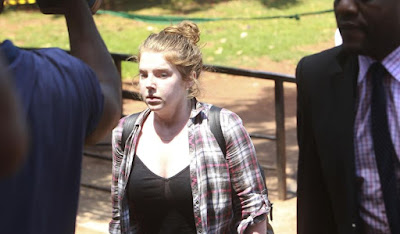 Pictured above is Martha O'Donovan. She is a citizen of the United States, and a journalist who has been living and working in Zimbabwe.

O'Donovan is now in jail, because she has allegedly insulted Zimbabwe President Robert Mugabe. In Zimbabwe, insulting the president is called "subversion," and can lead to twenty years in prison. O'Donovan's actions might also support charges of "undermining the authority of or insulting the president." Here is a link to a recent news story, by Farai Mutsaka of the Associated Press, outlining O'Donovan's current problems.

What did O'Donovan actually say, or do? In a Twitter posting, O'Donovan said that 93-year-old Mugabe is a "sick man."

Well, this is why I love the First Amendment. I have said far worse things about the President of the United States, Donald J. Trump, and lots of other people have, too. Despite such insults, I do not expect to spend twenty years, twenty days, or even twenty hours in jail. That's what our commitment to free speech guarantees.

President Trump probably loves the First Amendment, too, or at least he ought to. Talk about Twitter-based insults! Our President is the Master!

Here's some free advice for President Trump: don't visit Zimbabwe when that Twitter urge hits you!