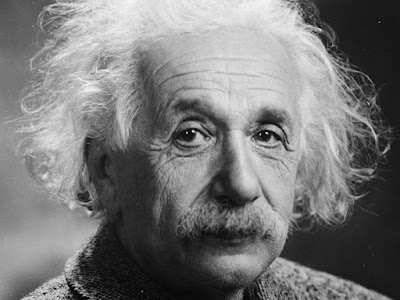 On Halloween, a "spooky" title seems just right. And there has been a lot of talk, recently, about experiments that seem to prove, or at least "bolster," the idea that what Einstein called "spooky action at a distance" is actually a real thing:

The term "spooky action at a distance" refers to the idea that "two physically separated particles can have correlated properties, with values that are uncertain until they are measured." The phenomenon  is often called particle "entanglement," and suggests that two separate particles, found at opposite ends of the universe, can be "entangled" in a way that lets them, essentially, "communicate," or transfer information between themselves, despite their vast physical separation. That does, indeed, seem pretty "spooky" to me, or maybe "weird," or "unbelievable."

Naturally, if Einstein said it was true, I would tend to believe Einstein, but despite what The Atlantic headline would seem to indicate, I am not so sure that Einstein ever agreed that "spooky action at a distance" is a real thing. The PHYS.ORG website reports, in fact, that Einstein was "dubious" about this theory. He gave it a name, but had his doubts.

If you type, "Einstein, Spooky Action" into a search engine, you'll find lots more articles on this subject, the ones I have listed being among the most recent I've found. The latest experiments, as indicated above, appear to indicate that the phenomenon Einstein named is, in fact, a genuine reality.

Despite my reading on the topic, I really don't get how "particle entanglement" would work, or what that even means. That, however, is just exactly why I am fascinated by this topic.

If the "entanglement" theory is true, then our conventional ideas of time, space, and reality probably need to be reevaluated, and it seems to me that my "Two Worlds" idea could, quite possibly, be related to the subject.

We are born into a world that we did not create ourselves. Where it came from, and why it exists, is totally mysterious, but we are continually trying to assert our own dominion over this World of Nature - including by efforts to assert that we understand it (or at least can understand it).

If it turns out that the reality of the World of Nature cannot, in fact, be explained in the terms that we have always used to make sense of it, then maybe we should start accepting the idea that we are subject to the mystery, instead of being in charge of it.