#294 / The Inevitable Nature Of American Force 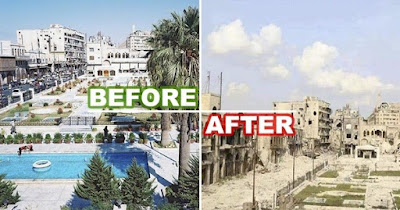 David Ignatius, one of those pundits who provide me with a reliable and almost daily dose of outraged irritation, does his business in The Washington Post. Why am I so irritated by our pundits and their punditry? Generally, it's because of their smug self-satisfaction, and their routine willingness to celebrate the "greatness of America," without a shred of empathy for any non-Americans involved. Ignatius is only one of many. The name Thomas Friedman also comes to mind.

In a column I read in my local newspaper on Friday, October 20th, Ignatius celebrates what the United States has done in Raqqa, the capital of the ISIS Caliphate. Please see the pictures above, which I find appalling. Here is Ignatius' take:

The heaps of rubble in Raqqa that once housed terrorists and torturers convey a bedrock lesson, as valid now as in 1945: It’s a mistake to provoke the United States. It may take the country a while to respond to a threat, but once the machine of U.S. power is engaged, it’s relentless — so long as the political will exists to sustain it.

The "heaps of rubble" in Raqqa, as shown in the picture, are not, really, properly described as the remains of buildings that "once housed terrorists and torturers." In fact, the buildings now destroyed mainly housed men, women, and children who had nothing at all to do with terrorism. American violence has turned an historic city into a ruin, and has displaced almost all who lived there. The New York Times carried an article in its October 19, 2017, edition that properly notes that the fall of the ISIS capital will mean the dispersement of its jihadist membership elsewhere. In other words, here is a real life demonstration of the truth of that "morcellator metaphor."

Ignatius suggests that former president Obama and our current President, Donald J. Trump, should get together at the White House in a joint appearance, to celebrate and dramatize just how steadfast and solid is the American determination to reduce to rubble any city that houses people that the president decides should be destroyed. This, says Ignatius, is the "inevitable nature of American force." Raqqa is only one of many cities that have received the treatment depicted above.

Allow me to suggest that what is pictured here is not a "victory." No celebratory words or actions are appropriate.

The kind of commitment and determination that Ignatius trumpets (to destroy the cities that house persons whom the president of the United States has decided should be extirpated), is a prime example of that "eye for an eye" philosophy that leaves the whole world blind.

If you don't want refugees, don't destroy the cities where the people live.