#295 / Our Politics Must Be Based On Division 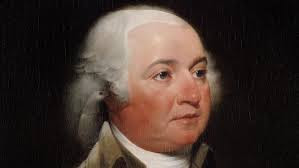 Friends Divided, a new book by historian Gordon S.Wood, charts the lives of two of our early presidents, John Adams and Thomas Jefferson. It is Adams who is pictured above. In many ways, Adams and Jefferson can be taken as exemplars of two different and persistent tendencies in American politics, which have prevailed from the time of the Constitution till now.

The purpose of this blog posting is mainly to highlight the following statement, contained in a review of the book by Alan Taylor. The review appeared in The Wall Street Journal yesterday, October 21, 2017, and I found Taylor's concluding words to be of significant interest:

We should not be so quick to dismiss Adams as “irrelevant.” Indeed, contemporary politics render him alarmingly prescient. He astutely predicted, “Our Government must forever be a kind of War of about one half the People against the other.” He warned Americans that they could never eliminate the voracious political power of wealth in an unequal society. Therefore, American constitutions needed to isolate that power in one branch of the legislature lest it, instead, seep into and take over every political institution while wearing the façade of democracy. He imagined the day when the pose of populism would empower a plutocracy. Never has John Adams been more relevant than today.

The idea that our politics is best described as a "War" within the Republic is probably distasteful to many, who would like to think that we should be able, as Rodney King put it, to "just get along." In fact, however, debate and discussion, controversy and conflict, must necessarily be at the very heart of our political life, because we are both individuals and part of a greater whole, and we have different individual ideas, and interests. The aim of our "politics," as we indicate on the basic unit of our currency, is that we must seek to forge our many and divergent ideas and interests into "one" course of action: "E pluribus unum." The task is a continuing obligation and enterprise, and the "battle" brings the kind of joy that Hannah Arendt calls "the public happiness."

If we are divided, and we are, "money" and "wealth" are not the least important evidences of that division. In the quote above, Adams is suggesting that the Senate, and that body alone, should be where "money talks." The House of Representatives is to be the place where "the people" prevail. As we know, money has overwhelmed everything, today, which means that our political institutions no longer function as they should. We do, indeed, find ourselves in the situation where "populism" has empowered a "plutocracy."

How will we recover the "lost treasure" of our democratic system? More on that tomorrow!