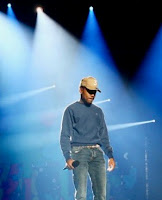 David Brooks, the New York Times' columnist, says that this picture, to the left, is "What Sincerity Looks Like." The picture is of Chance the Rapper,  a hip-hop artist, performing in Santa Monica, California in September.

Brooks was greatly impressed with Chance the Rapper's appearance on “The Late Show With Stephen Colbert.” If you click this link, you can see what Brooks was talking about, and listen to an unreleased and untitled track that deals with the impacts and perils of stardom.

Brooks contrasts "sincerity" with "authenticity." Pictured below, in her recently-released video, "Look What You Made Me Do," is the person Brooks says is seeking the latter (authenticity) rather than exemplifying the former (sincerity). Yes, he does mean Taylor Swift:

Here's what I liked best about Brooks' column. He says bad things about people who are "working their brand." That phrase irritates me, too. Here's how Brooks looks at it:

The first thing you notice in comparing the Chance and Swift songs is the difference between a person and a brand. A lot of young people I know talk about “working on their brand,” and sometimes I wish that word had never been invented.

A person has a soul, which is what Chance is worrying about. A brand has a reputation, which is the title of Swift’s next album. A person has private dignity. A brand is a creation for an audience. “I’ll be the actress starring in your bad dreams,” is how Swift puts it.

For those who still remember the Bible, there is a verse in Matthew (16:26) that sums it all up:

What will it profit you to gain the whole world, if you forfeit your soul?

I think I'll skip the bathtub filled with diamonds. I'm sticking with sincerity!