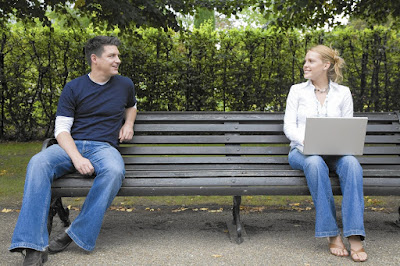 One of my neighbors (never met him) posted an appeal on the Nextdoor website, recommending "Next-Door Strangers: The Crisis of Urban Anonymity," an article by Marc J. Dunkelman. Dunkelman is a fellow in International and Public Affairs at the Watson Institute at Brown University, and his article appeared in Hedgehog Review.  You can read the article by clicking the link above.

Since the point of Dunkelman's article is that the Internet is not really a very good way to forge meaningful human relationships, and that using the Internet to connect with others is not really the best way to build community, it is somewhat ironic that my neighbor went to the Nextdoor website to make his recommendation. On the other hand, the alternative would have been for my neighbor to go door to door around the block, handing out copies of the article, or a slip of paper with the URL, and that would have taken a lot of time.

It turns out that Dunkelman and my neighbor are not alone in thinking that we need to find better ways to establish "real" community connections. In looking for an image to head up this blog posting, I immediately found an article in the Chicago Tribune that echoes Dunkelman's point. It refers to a book by Kio Stark, When Strangers Meet: How People You Don't Know Can Transform You. Stark has a TED Talk video on this topic, as well, and Dunkelman has his own book out, The Vanishing Neighbor: The Transformation of American Community. I am certain that this does not exhaust the available literature on this subject, making clear the need for "real" as opposed to "Internet" community. The name Zeynep Tufekci comes to mind - she is one of my favorites - and I have pontificated to his effect, myself.

Let's stick to Dunkelman for the moment. I thought that this story, excerpted from his article, really made the point:

Late one afternoon nearly two decades ago, having made my way down the length of Manhattan’s west side, I met my grandfather at a quaint Italian restaurant in the West Village. He greeted me in the vestibule, gave me a hug, and asked how I’d thought to recommend this particular trattoria. I explained that an old buddy who’d grown up in New York had suggested it, but I quickly added that in the near future neither of us would have to depend on personal recommendations. That same friend had recently offered me a demonstration of Vindigo (a precursor to Yelp, the social networking site that rates local businesses). Once installed on a Palm Pilot (a precursor to the iPhone), the app would list all the restaurants near any given Manhattan intersection, sorted by cuisine. After a user selected the restaurant, Vindigo would offer walking directions.

I’d expected my grandfather to guffaw—oh, the wonders of modern technology! Instead, he frowned. “Marc, when I was a young salesman traveling between hosiery mills in the small towns of North Carolina, I’d get off a train with nothing but a suitcase and make my way over to a friendly looking stranger. ‘Is there a good place to eat around here?’ More often than not, that guy would direct me to a hole in the wall or a diner a few blocks away. With some frequency, we’d strike up a conversation—sometimes he would join me for the meal. He’d tell me when he served in the war and share some of the local folklore. After a few minutes we’d invariably be talking about our families. That’s how I got to understand the world—by talking to strangers.

That is how democracy works, too: talking to strangers! It's called "precincting," in the political context. Sometimes it is called "canvassing," and that means going door to door. I have some personal experience. It really works!