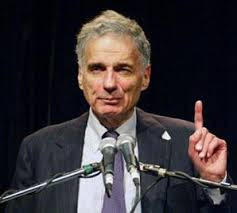 In a recent posting to his blog, In The Public Interest, Ralph Nader discusses "Destructive Stock Buybacks - That You Pay For." The following quotation captures the essence of what Nader has to say:

In a massive conflict of interest between greedy top corporate executives and their own company, CEO-driven stock buybacks extract capital from corporations instead of contributing capital for corporate needs, as the capitalist theory would dictate.

Yes, due to the malicious, toady SEC “business judgement” rule, CEOs can take trillions of dollars away from productive pursuits without even having to ask the companies’ owners—the shareholders—for approval.

The specifics of the stock buyback issue aside (and I do agree with Nader's analysis), the article should remind us that corporations may be "persons," as the United States Supreme Court said in the Citizens United case, but our government has the right to regulate "persons." Look in the mirror! You're a person, and you're regulated. Corporations can be regulated, too.

In fact, corporations are uniquely created by and under legal arrangements made by various governments, and since corporations now seem to have more impact on our lives than the government itself, it might be a good time to start focusing some of our political energy on corporate reform and control strategies.

This is just a thought. I think the public is (or ought to be) ready to turn its outrage into real regulations! Until we effectively start controlling the corporations, they will continue to control us. As Nader says, they're "stocking up," and it's at our expense.