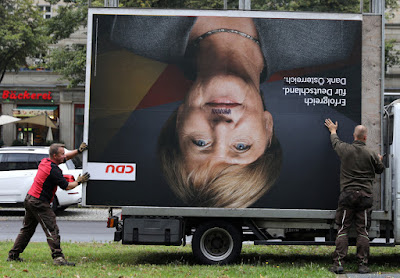 The picture above comes from a September 25, 2017, story in The National Interest, a publication "guided by the belief that nothing will enhance [American] interests as effectively as the approach to foreign affairs commonly known as realism—a school of thought traditionally associated with such thinkers and statesmen as Disraeli, Bismarck, and Henry Kissinger." I believe it is fair to say that this self-identification places The National Interest on the "conservative" or "right hand" side of the American political spectrum. Henry Kissinger is no friend of "liberals" or "progressives," at least not any that I hang around with.

The article that accompanied the picture in The National Interest was titled, "German Politics Is Giving Rise to a New Tide of Populism." The article discussed the recent elections in Germany, and specifically the unexpectedly strong showing of the Alternative for Germany Party, or AfD, which attacked Angela Merkel's Christian Democratic Union / Christian Social Union government from the right.

While Merkel's supporters got by far the largest share of the votes cast in the election, the picture conveys the idea that German politics has now been turned "upside down." The defacement of the advertisement being trucked away also suggests that Merkel is, in fact, some sort of Hitler-type figure, although it is the Alternative for Germany Party, not Merkel and her political supporters, which is showing a troublesome appreciation for the fascist afterglow of the Hitler era. If you believe that The National Interest, as a publication coming from the "right," intended for these messages to be conveyed by its illustration, you might also wonder whether its use of the word "populism" was intended to support a right-wing agenda. I think probably so.

The New York Times is not the same sort of publication as The National Interest, but the same kind of reference to "populism" was found in a New York Times' headline published over an analysis by Amanda Taub. Taub's commentary, which appeared in the September 27, 2017, edition of The New York Times, also commented on the German elections, with the headline proclaiming: "Behind More Success for the Far Right: Lessons From a Year of Covering Right-Wing Populism." I am citing to the headline found in the hard-copy edition. The online link will give you the same article, but with different text in the headline.

A dictionary definition of "populism" might cover far-right and "alt-right" political movements, here and elsewhere, since the dictionary says that "populism" is "any of various, often antiestablishment or anti-intellectual political movements or philosophies that offer unorthodox solutions or policies and appeal to the common person rather than according with traditional party or partisan ideologies." Conceding that this definition might fit current "alt-right" and far-right political efforts, I would like to suggest that we try, nonetheless, to use another word for those parties and persons espousing such far-right and fascist political tendencies.

Let's keep "Populism" for the good guys, in other words, and not use it to describe those who, like our President and his supporters,  claim to be for the "common person" but who actually aren't. President Trump is definitely making a bid to be considered a "populist" president. I would prefer not to concede this description.

In United States history, the "Populist" movement was a "left leaning," not a "right leaning" political effort, essentially seeking fairer economic treatment for farmers and agrarian small towns, which were suffering during the late 1800's. I hate to see this historical legacy given away to people like  President Trump, and his cohorts, Steve Bannon and Milo Yiannopoulos.

And one other thing. To the extent that "Populism" seems to reference the concept of "popularity," or something that is "popular," it's not the right title for "alt-right" and fascist politics, either here or in Germany. Those espousing right-wing, proto-fascist political views most emphatically do not reflect a majority viewpoint. They might get there if we give them the word "Populist."