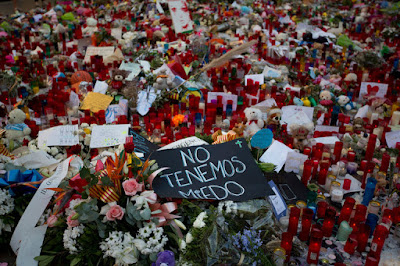 The picture above comes from an Op-Ed in the August 23, 2017, edition of The New York Times: "Barcelona Dares To Stay Open."

Carlos Delclós, who wrote the Op-Ed, is a sociologist and writer based in Barcelona. He is the author of Hope Is a Promise: From the Indignados to the Rise of Podemos in Spain. Delclós says that what has happened in Barcelona, after the horrific terrorist attacks in that city, is a "rejection of fear." That fearlessness, he says, is the product of a "thick social fabric...." Here is the essence of his message:

There is no reason that these positions [rejecting fear] should be specific to Catalonia. They are not a result of the good will, moral virtue or cultural traits of Catalan politicians or people. They are a result of a thick social fabric, woven over years of bottom-up political mobilization. This fabric is hardly specific to Catalonia. In the aftermath of the crisis, social movements have acted as something of a safety net, keeping Spain from going the way of other European countries, where reactionary and xenophobic ideologies have gained considerable political clout. To give in now to base fears and petty divisions would be to play into the hands of organized hate. If Barcelona, Catalonia and Spain truly want to show that they are not afraid, may it be by resisting the temptation to close themselves off and uniting instead around a commitment to being open to one another and to the world beyond their borders.

Being able to say, always, "no tenemos miedo" (we are not afraid) is an essential requirement for any democratic society. Let's not forget that, here in the United States. Let's not forget that it is only as we acknowledge and celebrate our unity, the "thick social fabric" which weaves us together, that we will find the ability, together, to rise above terror.