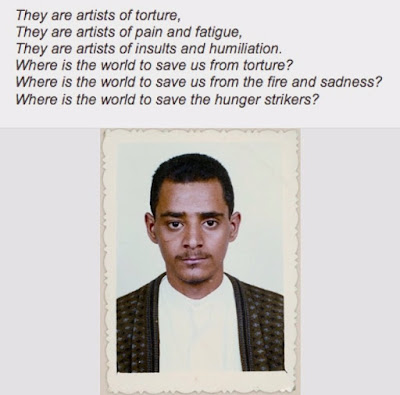 Pictured is Adnan Latif. The words are his. Who is this "they" he speaks about?" Who are these "artists of torture?"

It is we who are responsible. It is we, the citizens of the United States of America, who allow our elected representatives to kill and torture others in our name:

Adnan Latif travelled to Pakistan from his home in Yemen in late 2001 seeking affordable medical treatment. The 26-year-old had been experiencing neurological problems brought on by head injuries suffered in a car accident.

In December, Latif was caught up in a dragnet of young Arab men undertaken by bounty hunters in the aftermath of 9/11. In exchange for a reward, he was turned over to U.S. authorities in 2002 and transferred to the newly opened Guantánamo Bay Detention Camp. While there, Latif was subjected to repeated and prolonged torture, beatings, psychological abuse, and extreme deprivation. With other prisoners he participated in an extended hunger strike, during which inmates were painfully force-fed, and he attempted suicide on numerous occasions.

Latif was held for almost 11 years without charge. According to documents, military tribunals had concluded multiple times that he posed no threat and that there was no evidence to justify his continuing incarceration. He was cleared for release by officials as early as 2004 and again in 2007. A further court ruling in 2010 ordered the administration to “take all necessary and appropriate diplomatic steps to facilitate Latif’s release.”

On each occasion his release was denied, first by the Bush administration, and later by the Obama administration. In September of 2012, Latif was found dead in his cell, the ninth prisoner to die at Guantánamo. An autopsy was performed, but its results are classified. A year later his body was returned to Yemen, to his wife and his now 14-year-old son.

Forty-one prisoners remain at Guantánamo today. President Trump has pledged to add to its population, and Attorney General Jeff Sessions has called it “a very fine place.”

The text above comes from the Cabrillo Festival of Music Program Guide for its 2017 season. On Saturday, August 12th, I was privileged to hear "The Prisoner," the first work commissioned by the Cabrillo Festival under the new Music Director Christian Măcelaru. It was a moving tribute to Latif, with a score by Karin Al-Zand, and Latif's own words, sung by Jonathan Lemalu.

It would be comforting to say, "Never Again!" But that would be a lie. As the program notes reveal, our nation, even now, seeks to subject more persons to secret torture and incarceration. Our drone strikes continue to kill innocents on different continents.

We cannot say, "Never Again," without making that pledge a lie. What can we say?

This question from the Psalms is the very question Latif asked of us. Now, we must ask it of ourselves!