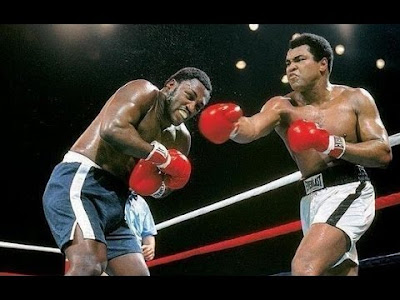 The final fight between Joe Frazier and Muhammad Ali, held in the Philippines in 1975, is popularly known as the "Thrilla In Manilla."

A couple of attorneys from West Virginia seem to think that a case to be heard by the United States Supreme Court during the Court's next term is going to be a judicial counterpart of that heavyweight battle. Click this link to read what Elbert Lin and Thomas M. Johnson, Jr. have to say about Christie v. National Collegiate Athletic Association.

The Christie case involves New Jersey Governor Chris Christie, and the issue is "sports betting." What makes the case important, however, for anyone who cares about democratic self-government, is the fact that the Supreme Court, by having brought the case up for a hearing, is apparently preparing to tell us what the Court thinks "federalism" means in today's world.

I happen to be deeply suspicious of the unchecked power of the federal government, and I am really happy that our Constitution includes the Tenth Amendment:


The powers not delegated to the United States by the Constitution, nor prohibited by it to the States, are reserved to the States respectively, or to the people.

Among other things, the Supreme Court has, in the past, said that the Tenth Amendment implies an anti-commandeering doctrine. Essentially, this doctrine says that the Congress cannot "commandeer" the legislative power of the state governments, and tell them what they can or can't do. When the federal government runs amuck (check your local newspaper or watch the television news), it is comforting to know that our independent state governments are, in fact, independent.

I recommend reading the whole article, "High stakes for federalism in heavyweight clash over the anti-commandeering doctrine." Here's the gist:

The parties and their counsel give the case an Ali-Frazier feel. New Jersey Governor Chris Christie versus the National Collegiate Athletic Association and all four major professional sports leagues (the National Basketball Association, the National Football League, the National Hockey League and Major League Baseball). Former U.S. Solicitor General Ted Olson versus his successor (and his principal deputy) Paul Clement. For Supreme Court junkies, you don’t get much closer to the Thrilla in Manilla. And though our briefs take no position on the policy of legalizing betting on professional and collegiate sporting events, there is no denying that the court’s decision could have significant real-world effects on that industry.

The reason we, as representatives of our state, are watching the case? It could be the first Supreme Court decision since Printz v. United States in 1997 – and only the third in the court’s history — to strike down an act of Congress for violating the 10th Amendment under the anti-commandeering doctrine. In the decision under review, the en banc U.S. Court of Appeals for the 3rd Circuit held that the Professional and Amateur Sports Protection Act of 1992 bars states that have existing state-law prohibitions on sports betting from changing those laws to allow some betting. The Supreme Court could, and should, hold that the 10th Amendment doesn’t permit Congress to exercise that kind of direct control over state law and legislatures. That is a holding that should be welcomed by most states, whether red or blue, and whether they support sports gambling or not.

Do we want the federal government to be able to "commandeer" state governments, and to tell them what they can and can't do? That's the question in this "Thrilla in Manilla" Supreme Court case.

I am with the commentators. The answer should be, "NO."