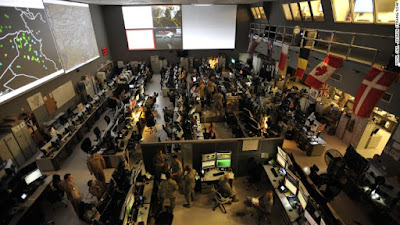 Thomas L. Friedman, pontificating pundit par excellence, has penned a column proclaiming how "pluralism" has made America great. The column was filed on August 16, 2017, and was titled "Charlottesville, ISIS and Us," and you can read that column by clicking the link.

Poor, Tom! When he wrote this column he was feeling like he was "in the wrong place at the wrong time." While all his fellow pundits were pontificating like crazy about racial hatred in Charlottesville, Friedman had been "traveling around the Arab world and Afghanistan with the chief of the U.S. Air Force, Gen. David Goldfein; his civilian boss, the Air Force secretary, Heather Wilson; and their aides."

Friedman's column was submitted from the Al Udeid Air Base (located in Qatar and pictured above). This giant airbase is the place from which America’s entire ISIS-Syria-Iraq-Afghanistan air war is run. It's a long way from there to Charlottesville, Virginia.

Poor Tom! He thought he was going to be on the "front lines" of punditry, and yet he ended up trapped in some remote, massive military installation, far from where the rest of the pundits were pouncing and pronouncing on all the latest tweets and other twaddle.

Never count Friedman out! He is such a pundit superstar that he can pull out a pontification on the topic of the day from even the remotest locale. After decrying his distance from Charlottesville, Friedman tried for a great save, to prove himself the premier pundit of them all:

I looked around me here, and the connection with Charlottesville became obvious. Just one glance at our traveling party and the crews at this base and you realize immediately why we are the most powerful country in the world. It’s not because we own F-22s. And it surely isn’t that we embrace white supremacy. It’s because we embrace pluralism. It’s because we can still make out of many, one.

I am a pluralism supremacist.

Right on, Tom! Racial hatred in the United States is really closely tied to all the killing we are doing in the Middle East, because "pluralism" is what makes us great, and pluralism is also what makes our killing machine so invincible.

Yes, that is Friedman's argument! Here it is, straight from that August 16th column:

The very reason America is the supreme power in this region is that the U.S. military can take all of those different people and make them into a fist [emphasis added].

We toured the command center here with its wall-size screens that take the data from satellites, drones, manned aircraft, cyber, sensors, human intelligence and aerial refueling tankers and meld them into a series of strategic targeting decisions. Watching the choreography of all this is both chilling and mesmerizing.

We are moving “from wars of attrition to wars of cognition,” explained General Goldfein. These new integrated systems are simultaneously “state of the art, unparalleled — and too slow for the future.”

On one recent day you could look up at those screens and find a Syrian fighter jet preparing to drop bombs near U.S. special forces in Syria. The Syrian jet is about to be blown out of the sky by a U.S. fighter jet, while two Russian fighters watch from a higher altitude and a stealth U.S. F-22 watches the Russians watching the U.S. plane watching the Syrian.

While that is all happening, the coastal Syrian surface-to-air system lights up as Turkish, Jordanian and Israeli jets buzz in and out of theater. And almost daily an Iranian-made drone being directed from the back of an R.V. by Iranian Revolutionary Guards members in the desert of eastern Syria is hunting for U.S. special forces. We’ve shot down a couple of those, too.

If you tried to sell this very real drama to a video game company, it would be rejected as unrealistic.

Oh, Tom! Here is what I think is unrealistic: celebrating the United States' use of massive military power to dominate the world while proclaiming the virtues of "pluralism." Somehow, to me, that just does not compute. Because of the multiple military killings applauded by Friedman, our nation comes across, internationally, in exactly the same way the white supremacists come across in Charlottesville. That might have made a column, but Tom doesn't see it that way, any more than President Trump sees alt-right Nazi demonstrators as any different from those protesting the white supremacists.

In the end, despite Tom's heroic efforts to make his August 16th column relevant, knowing that he had to file it from a location far from the epicenter of the day's punditry, I'm counting Friedman's column on Charlottesville, filed from Qatar, as a flaming failure. His effort to portray himself as the Babe Ruth of punditry just falls flat:

Thomas Friedman is at the plate in the bottom of the ninth; his team is behind by a run with two outs and the bases loaded; he faces a 3-2 count, and he points his bat to the centerfield stands: pluralism is the power that will make us win! And pluralism, let's not forget it, is defined and symbolized by our military might.

Tom, the pundit, brings his mighty bat around....

And Tom ... (that mighty pundit, Tom) strikes out!