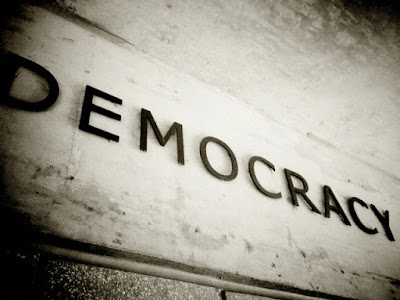 E.J. Dionne, Jr. writes a column for The Washington Post. One of his recent columns had this title, as it appeared in The San Francisco Chronicle: "Stand up for liberal democracy."

Listing a number of contemporary challenges to human civilization, running from climate change to the current confrontation between the United States and North Korea, Dionne says that "the challenge to liberal democracy is far and away the most consequential question facing the world." This is true, says Dionne, because "liberal democracy is essential for solving every other problem."

Liberal democracy, Dionne says, "assumes that history is open and that free electorates can change their minds and their governments. Oppressed groups have a right to agitate and organize against injustices, and new ways of reforming society are given room to emerge." In other words, "liberal democracy" is the way that we can address our collective challenges and opportunities, and jointly fashion a world that meets our deepest aspirations.

For Dionne, "liberal democracy" means "a belief in governments created through free elections and universal suffrage; an independent judiciary; and guarantees of the freedoms of speech, assembly, religion and press."

Dionne also states that "the right to private property is a characteristic of liberal societies," and insists that "there is also an important place for social insurance, government provision of various services (education and health care among them), and rules protecting workers, consumers and the environment." Indeed, Dionne says, "the vast inequalities that capitalism can produce when unchecked typically undermine liberal democracy, and are doing so now."

Looked at analytically, it seems to me that Dionne too easily conflates the governmental procedures that establish democracy (free elections with universal suffrage, a free press, freedom of speech, freedom of religion, freedom of assembly, and an independent judiciary) with some of the accomplishments that Dionne attributes to the operations of this "liberal democracy" - things like "rules protecting workers, consumers, and the environment, and governmentally-provided health care and education."

What counts more? The democratic procedures that Dionne lists, or the "results?" It seems pretty clear to me that Dionne is most concerned with the "results." He fears that because the procedures that establish "liberal democracy" are not delivering acceptable results, we are on the way to discarding the procedures of free elections, a free press, free speech, freedom of religion and assembly, and an independent judiciary. Here is how he concludes his column:


When liberal democrats become arrogant and forget that governments have an obligation to create the circumstances for widespread well-being, autocrats will always be there offering security and prosperity in exchange for less freedom. Liberal democracy must be defended. It must also deliver the goods.

The "bottom line" for Dionne, is that those governing our nation (and he calls them "liberal democrats") have allocated too much to the rich, and not enough to everyone else. Our government is serving the 1%, not the 99%, and this is putting the whole premise of our democracy in peril.

I certainly agree that the economic misallocations Dionne identifies are horrific, and I am definitely a believer in "democracy." I am not only happy to use that word, but I am even willing to call democracy "liberal democracy," if that makes people happy. What is most important to me, however, and even more so than "democracy," is "self-government," a government in which we ourselves are personally engaged.

If "liberal democracy" is in trouble around the world, as Dionne correctly suggests, one reason is that "we, the people," those supposedly in charge of our government, are now more "governed" than "governors." The results of recent governance have been bad, as Dionne says, but the biggest problem for us may be less with the "results" than with the ever-more obvious reality that those making decisions are not "we, the people," but incredibly rich and powerful special interests that are governing everything, and using free elections, the free press, and free speech in the process of doing so.

Unless large numbers of ordinary men and women reengage, and become more directly and personally involved in government, neither "procedures" nor "results" will produce a commitment to the common enterprise of government that allows us to "solve every other problem."