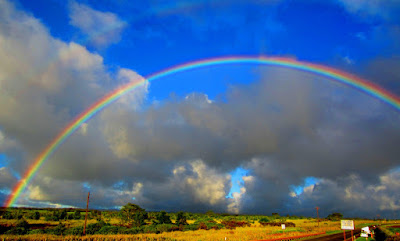 I wrote about "identity politics" in my blog posting yesterday. Particularly after the violence in Charlottesville, Virginia, last Saturday, lots of people are thinking about that term. The Wall Street Journal, for instance, which ran one of the articles I referenced in yesterday's blog posting, devoted its lead editorial on Monday, August 14, 2017, to "The Poison of Identity Politics."

The Journal editorial said that "a politics fixated on indelible differences will inevitably lead to resentments that extremists can exploit in ugly ways..." As might be expected, The Journal had examples of ugly, extremist behavior coming from the "left," as well as from the "right."

Many think our president was more "cause" than "symptom" of the divisions that gave rise to the events in Charlottesville, but assigning blame may not be our best focus. Maybe we should be looking for a way out. Metaphorically speaking, we might think about how to precipitate a "rainbow."

The "rainbow" metaphor is inherently problematic, however, and I suppose a good argument could be made that Jesse Jackson, in his effort to promote a "rainbow coalition," actually stimulated the kind of "identity politics" that The Wall Street Journal, among others, now denounces. Wikipedia reminds us that the National Rainbow Coalition was a political organization that grew out of Jesse Jackson's 1984 presidential campaign:


During the campaign, Jackson began speaking about a "Rainbow Coalition." The goals of the campaign were to demand social programs, voting rights, and affirmative action for all groups that had been neglected by Reaganomics. Jackson's campaign blamed President Ronald Reagan's policies for reduction of government domestic spending, causing new unemployment and encouraging economic investment outside of the inner cities, while they discouraged the rebuilding of urban industry. The industrial layoffs caused by these policies hit the black and other minority populations particularly hard. At the 1984 Democratic National Convention on July 18, 1984, in San Francisco, California, Jackson delivered an address entitled "The Rainbow Coalition." The speech called for Arab Americans, Native Americans, Asian Americans, youth, disabled veterans, small farmers, lesbians and gays to join with African Americans and Jewish Americans for political purpose. Whereas the purpose of PUSH had been to fight for economic and educational opportunities, the Rainbow Coalition was created to address political empowerment and public policy issues. After his unsuccessful bid for the Democratic nomination in 1984, Jackson attempted to build a broad base of support among groups that "were hurt by Reagan administration policies" - racial minorities, the poor, small farmers, working mothers, the unemployed, some labor union members, gays, and lesbians.

I have linked Jesse Jackson's convention speech, below. The way I understand Jackson's use of the "rainbow" metaphor, he was calling not for the fracturing of civic unity into a multitude of discrete elements, the way a prism takes the unity of light and manifests its different wavelengths, in different colors. Quite the opposite, Jackson wanted to make clear the "unity," not the differences, that should bring Americans together.

I do think we are looking for a "rainbow," politically, but a rainbow that unifies our differences in a single, majestic symbol of our common aspirations.

A "rainbow" is one thing. The colors that comprise it are many and different.

Are we defined by our differences, or by our unity?

What kind of a "rainbow" can be our guide?