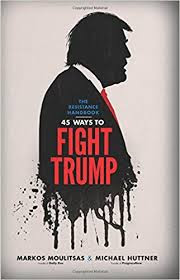 I just got through reading the book whose cover is pictured on the left. Markos Moulitsas, founder of Daily Kos, and Michael Huttner, founder of ProgressNow, outline ways to change our national politics in the time of Trump.

The authors have some very good ideas, and they outline their "45 ways to fight Trump" in five different sections:

I particularly applaud Sections IV and V, since that is really what democratic self-government is all about. We, the people, can and must assert control over our own government, but generally speaking, talking about it isn't going to be enough. Some actual action, focused on elections, is going to be required. This is the message of activist Micah White, too, about whom I wrote in a blog posting a week or so ago.

I do want to say that there were some things in the Moulitsas-Huttner book that I found disturbing. Specifically, statements like these:

Let me comment, first, on why North and South Dakota (two separate states) have four senators to California's two. It's pretty clear why! Our Constitution allocates TWO senators to each state, regardless of population. While we could have organized our nation differently, there are some very good reasons to have adopted a "federal" system. "Mass democracy" has its potential problems. Read Hannah Arendt if you need convincing.

Avoiding any debate on the merits of our federal system (and there are definitely arguments on both sides of the question), I don't like to see the authors deliberately attempting to mislead their readers.

The sentence to which I object acts as though there is an "equivalence" between "the Dakotas" and "California." The sentence therefore implies that the allocation of two senators to California, while "the Dakotas" get four, is somehow unfair and "illegitimate." Of course, unless and until we amend the Constitution, the allocation of senators that the authors complain about is totally "legitimate," and it's not "unfair," either. That's the system we've set up. It would be fine to argue for a change to the system, but unless the system is changed, giving "the Dakotas" four senators is exactly the way our system is supposed to work. There is nothing "illegitimate" about the system. Quite the opposite!

While the authors' misleading statement about "the Dakotas" doesn't use the word "illegitimate," it gives the impression that the authors believe that the system established in our Constitution is "illegitimate." That is a word used liberally throughout the book, as noted in my list, above, of objectionable statements.

In every case, the authors say that Trump's victory was "illegitimate," and if that were true, that would seem to justify extraordinary actions outside the confines of the law. I am not a Trump fan, but the authors are way out of bounds, in my opinion, in seeking to inflame public opinion on the basis that Trump is another Hitler (he and his "brownshirted cronies"), or that he is not the "legitimate president," or that we do not live in a "legitimate democracy."

This is a very dangerous set of assertions.

If our democracy has in fact "failed," in some fundamental way, so that our elections are no longer "legitimate," then what are we to do? In fact, the "45 Ways To Fight Trump" are all actions well within the boundaries of normal democratic activities. But the prefatory materials suggest that this isn't really enough.

Be careful for what you wish for!

Portraying our democracy as having failed, and rating it as "illegitimate," sets us all up for a political civil war. I don't think the outcome would be so good!

Furthermore, there seems to be some interest in moving into such a chaotic situation. As an example, a news story yesterday reported on a poll that apparently indicates that more than half of the voters who are registered as Republicans would support a "postponement" of our next presidential election, if the president called for such a delay.

From the left, a popular comedian (Chelsea Handler) has apparently called for a military coup.

I am sorry that Donald Trump won the election. I think he is unqualified and unsuited for the job, and he should be replaced. There are several different ways that could happen, but voting him out of office, the next time there is a presidential election, is the normal way we take care of such matters. To say that our system is "illegitimate" opens up the possibility that some other means for governing ourselves should be chosen. And if the last election wasn't "legitimate," then maybe we should delay the vote next time around, or ask the generals to take charge!

Friends, that's the door to Venezuela! Or Kenya. Or the Philippines.

Let's stop any further talk about the "illegitimacy" of our current democracy, or of the president the nation elected.

Check out the 45 ways to make sure the next election produces a different result! Our very legitimate democracy can take care of business; that's what I think. Suggesting that it can't is dangerous in the extreme.