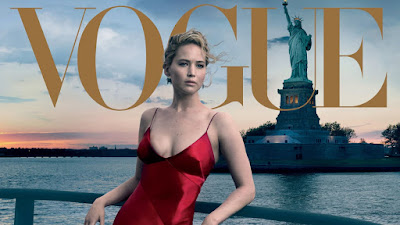 John Carney runs finance and economics coverage for Breitbart, which is an "alt-right" news source on the web. Carney was formerly an editor/writer for The Wall Street Journal, and he also says he was a Wall Street lawyer (among other things).

When Carney saw the latest cover on Vogue magazine (as pictured above), he immediately identified the cover as an attack on President Trump and the president's MAGA program. Naturally, he broadcast his analysis by posting a Tweet that you can read right here. If you are unclear about that "MAGA" reference, it means "Make America Great Again." I, personally, had to look it up!

If it seems strange to you that the picture above could be considered an attack on the President, and on his alt-right supporters, please remember that Stephen Miller, one of the president's senior advisors, has recently denounced any effort to link the Statute of Liberty to a "welcoming" approach to immigrants. I just did a blog posting about Miller, and of his disdain for this interpretation of what the Statue of Liberty stands for, so I did not have any problem understanding what Carney was thinking.

In my previous posting on Miller v. Lazarus, I said I was "on Lazarus' side." Now, I guess I'm on Jennifer Lawrence's side, too, though I'm hoping she's not right about that "end of the world" comment. Given the president's approach to negotiating with North Korea, she could have a real point.

Here is what Lawrence told Vogue, in November 2015:

My view on the election is pretty cut-and-dried: If Donald Trump is president of the United States, it will be the end of the world. And he’s also the best thing to happen to the Democrats ever.

That's an attack! The Vogue cover? Well, maybe not so much.