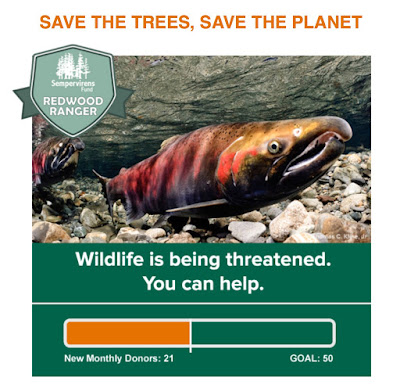 I routinely read Bratton Online, a weekly blog covering all things Santa Cruz, and the July 26 - August 1 edition had some distressing news about Sempervirens.

Here is the Bratton Online story in its entirety:

Betsy Herbert, longtime forest activist, resigned from the Board of Directors of the Sempervirens Fund. Her environmental and community serving credentials are impressive: A PhD in environmental studies from UCSC, longtime local forest advocate, former watershed manager for San Lorenzo Valley Water District, currently President, Santa Cruz Mountains Bioregional Council and board member, Center for Farmworker Families. Most importantly now is that she served on the Sempervirens Fund board for 15 years until she resigned last week.

Historically, the Sempervirens Fund has used money from donors to provide permanent protection to the redwood forests of the state. Now, over Betsy’s objection, the Board has put Rich Gordon, former Member of the Assembly, on the Sempervirens Board. What makes this exceptional is that Gordon has just been named as the President and Executive Director of the California Forestry Association, which is the state's main lobbying group representing the timber industry. The CFA website tries to present itself as working for "sustainable forests." In fact, the CFA’s main mission in Sacramento is to make it easier to cut down more trees. Here’s the California Forestry Association website.

Here's what the CFA has to say about Rich Gordon:

California Forestry Association (Calforests) Chairman Arne Hultgren announced today that former Assemblyman Rich Gordon has been named its new President and CEO, effective July 17, 2017. “We've worked with Rich for years and are pleased to have him join our Association. We are confident his leadership and policy experience will continue to create great policy results for California and for our membership,” said Chairman Hultgren. Gordon brings more than 20 years of public service experience to Calforests, having most recently completed three terms in the State Assembly, where he served in leadership and successfully carried legislation supporting sustainable forestry. He also served as a member of the San Mateo County Board of Supervisors, during which time he sat on the Board of Directors of the California State Association of Counties (CSAC). Gordon was president of CSAC in 2008. He has extensive nonprofit experience and was the founder of Youth and Family Assistance, an agency in San Mateo County serving at-risk youth.

As President and CEO of Calforests, Gordon will be replacing retiring President David Bischel, and will be responsible for providing leadership and strategic direction for the Association. In this capacity, Gordon will represent more than 4 million acres of private and family-owned forests; 95 percent of the States forest product manufacturers; producers of renewable biomass energy; and, forestry-related professionals.

“Healthy forests are crucial to the sustainability of our planet. It is an honor to have been chosen to lead an industry association that plays a key role in Californias environment and economy,” said Gordon. “I look forward to working on behalf of Calforests for the benefit of allCalifornians."

I was an environmental lobbyist for the Planning and Conservation League from 1995 to 1998, and from 2005 to 2008, working in the California State Capitol. Among other things, on behalf of PCL, I opposed the enactment of bills to make timber harvesting easier, and bills that would undermine regulations that protect our state's threatened forestlands. I think I have a pretty good idea about who does what in Sacramento, where timber legislation is concerned, and the characterization in the Bratton Online column is accurate. The California Forestry Association is a major advocate for the state's timber industry. The CFA is emphatically not out to "Save Trees."

I don't know what Sempervirens was thinking, but I believe that allowing the state's major lobbyist for the timber industry to have a place on the Sempervirens Fund Board was not a good call. At the very least, the CFA will use Gordon's affiliation as part of its lobbying pitch, as it attempts to get legislation that makes timber cutting easier. If things are worse, the retention of Gordon on the Sempervirens Board indicates that Sempervirens may be wanting to "make deals" in Sacramento, helping to support timber industry legislation in return for money for forestry acquisition.

There IS such a thing as a bona fide conflict of interest. I know one when I see one. Apparently, the Sempervirens Fund Board doesn't...or doesn't mind the conflict, on the theory that the organization is going to get some sort of benefit.

Whatever best describes the reality, the words "non-donor" best describe me, with respect to the Sempervirens Fund.

I am not giving money to an organization that says it wants to "Save Trees," while it puts the state's foremost timber industry lobbyist on its Board of Directors.

I am not giving money to an organization that doesn't know what a conflict of interest is.....