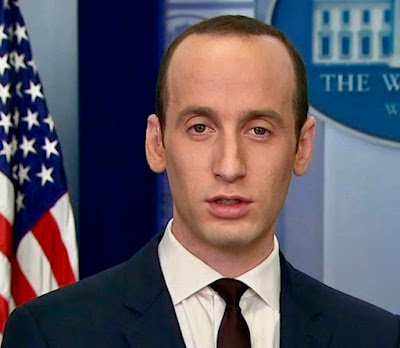 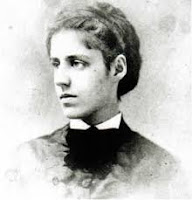 Stephen Miller, President Trump's senior advisor for policy, is pictured above (in color). To the right (in black and white) is a picture of Emma Lazarus.

Miller is known for his claim that President Trump, as the nation's Chief Executive, has unbridled prerogatives with respect to actions relating to national security. Miller is particularly well known for having stated that the President's national security actions "will not be questioned."

Of course, the President's national security pronouncements and actions have "been questioned," and I trust will continue to be questioned, since giving the Chief Executive "unquestioned" or "unquestionable" authority is one of the prime evidences of oppressive, and even totalitarian, government.

Lazarus (1849 – 1887) had no particular connection to Executive power. She was a poet, and is the author of "The New Colossus," a very famous poem indeed, engraved on a bronze plaque and mounted at the Statue of Liberty:

Not like the brazen giant of Greek fame,
With conquering limbs astride from land to land;
Here at our sea-washed, sunset gates shall stand
A mighty woman with a torch, whose flame
Is the imprisoned lightning, and her name
MOTHER OF EXILES. From her beacon-hand
Glows world-wide welcome; her mild eyes command
The air-bridged harbor that twin cities frame.

"Keep, ancient lands, your storied pomp!" cries she
With silent lips. "Give me your tired, your poor,
Your huddled masses yearning to breathe free,
The wretched refuse of your teeming shore.
Send these, the homeless, tempest-tost to me,
I lift my lamp beside the golden door!"

Miller, it seems, does not much appreciate Lazarus' poem, or the sentiments it conveys. The Huffington Post, reporting on a Miller press conference, says that Miller "denied that ... the poem inscribed on the Statue of Liberty has any meaning because it was added after the statue was erected [emphasis added]."

In fact, words have "meaning" based on what they say, not based on when they were engraved on a plaque. So, the statement attributed to Miller about "The New Colossus" is right in tune with his off-kilter statement about the President's authority over national security.

To be fair, however, as I read The Huffington Post article, and as I listened to what Miller said in the accompanying video, I did not find that Miller actually claimed that "The New Colossus" had "no meaning." He just claimed that it was not an accurate statement of how America has related to immigrants, and certainly not how our nation should relate to immigrants now. The latest idea of the Trump Administration, about immigration, is apparently that there should be a requirement that immigrants already know English before they are allowed to enter the country. Breitbart calls this "merit based immigration reform." That approach does seem to run counter to the promises found in the Lazarus poem. Miller (and presumably the President) doesn't care.

I was disappointed, I'll confess, to find that Miller apparently did not actually claim that "The New Colossus" had "no meaning." Such a claim would have been absurd, and that is probably why The Huffington Post presented Miller's comments in the way it did. The "Huff Post" didn't agree with Miller, and so wanted to make him look as bad as possible.

This kind of public discourse, practiced on both sides and all across the political spectrum, is ultimately destructive of democracy. Distorting comments with which you disagree, to make them seem absurd or outrageous, the better to dismiss the comments as unworthy or wrong, ultimately undermines the whole idea of democratic debate, in which two or more different opinions contest against each other, with the decision being made "on the merits" of the argument, not on the basis of a distortion of an opponent's view.

Let's reject Miller (and President Trump) on the merits, not on the basis of a misrepresentation about what they claim. Miller argues for a closed-door America, not an open-door America. There are legitimate arguments on both sides of that debate, but in the case of Miller v. Lazarus, I'm on Lazarus' side. Her words do "have meaning," and the meaning of those words is that America welcomes everyone, and is prepared to find a place for even the "wretched refuse" of other nations.

Our experience has demonstrated the wisdom of such openness, and of such a welcome to all. Those who appear to some - to persons like Miller, for instance - as human "refuse," are, quite often, the very persons who bring with them the vital energy of creativity and innovation, of cultural enrichment and productive labor, that helps this nation to prosper and succeed.