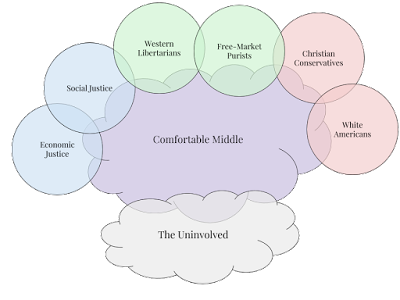 Yonatan Zunger, who writes about politics on the Medium platform, has written, recently, about "The Axes of American Politics." Zunger says that seven ideologies determine how politics works in the United States today. The graphic above diagrams his ideas, but you really have to read his explanation fully to understand what he's getting at. Click the link to read Zunger's explanation of his "seven ideologies." I am most interested in that purplish cloud, the so-called "Comfortable Middle."

It is Zunger's contention that there is such a "Comfortable Middle" in our politics, and that this is a real group of real people. Zunger further says that this group is "defined by its shared commitment to not having politics be the center of its life." Zunger has the "Comfortable Middle" group shading into the "Uninvolved," which is a group comprised of people who are "entirely disconnected from politics."

My personal political experience substantiates the existence of many persons who are "uninvolved" in politics (and who really don't want to be involved). I find it intriguing, however, to think that there is a defined and discernible group of people, the members of which are taking active steps to make sure that politics is not, and does not become, the center of their lives. That kind of a relationship to politics is not the same thing as a lack of "involvement." At least, not as I understand Zunger's concept. He posits people who affirmatively reject a substantial involvement in politics, and who have to spend some energy to make sure that they don't become entrapped.

I had never really thought about this before. "Uninvolved" I understand. I have seen it. Many people are just not interested in politics, for whatever reason, and so they are "uninvolved." And frankly, that's fine, in my opinion, as long as any member of the "uninvolved" contingent always has a standing invitation to enter the world of politics and participate. But what about a group that has a "shared commitment to having politics not be the center of its life?" That requires real energy and effort of some kind!

I can understand the impulse that would lead people affirmatively to separate themselves from "politics," because politics appears to many to be a realm of lies and corruption. Keeping oneself out of such a corrupt and discouraging place can be seen as something that is worth some energy to accomplish. I do agree with Zunger, now that I have been presented with this analysis; he is correct that there is a group (he seems to think it's even larger than the "uninvolved"), who are taking care to be sure that they are not enticed into participating in a part of life that they think of as despicable.

But what of that modifier "comfortable?" I guess that this modifier is to suggest that those actively fleeing from any political involvement are doing that so as to be or remain "comfortable," since politics is all about conflict and controversy, and both conflict and controversy do tend to "afflict the comfortable." If that quoted phrase doesn't ring a bell that means you may be unfamiliar with Mr. Dooley, who says that newspapers should "comfort the afflicted, and afflict the comfortable." The press is part of politics, and any genuine politics really has the same mission.

I am not certain how Zunger intends the word "comfortable" to be understood, in the political schema he suggests. I want to say, though, that anyone who is seeking "comfort" by making an active decision to separate himself or herself from politics, is pursuing a flawed strategy. We do, in fact, live in a "political world," created and sustained by our own actions, and to make that world "comfortable" to us, to make it fulfill our hopes and aspirations, active involvement is the only strategy that works.