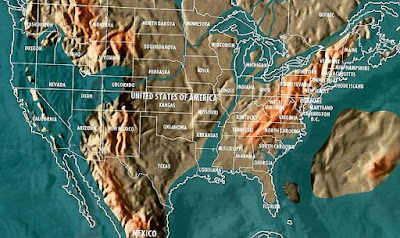 The picture above (and many others like it) can be found online. The title of the article in which these "doomsday maps" are found is titled, "The Shocking Doomsday Maps Of The World And The Billionaire Escape Plans."

Why has the fabulously wealthy Ted Turner bought so much real estate in Montana? Well, he may know something that we don't know. For instance, he may have inside information that California, Oregon, Nevada, Utah, and a good chunk of Colorado are shortly going to disappear, as the poles shift, and/or as an asteroid hits the earth, and/or as massive volcanic eruptions lead to massive worldwide flooding. Read all about it in the article I have linked, above.

And if you think the above illustration portrays a pretty dire "doomsday" scenario for the United States, check out the "doomsday maps" for Europe. Or what will once have been Europe, after "doomsday" arrives.

I am a "doomsday" kind of guy, actually, always willing to entertain the possibility that something really bad may be coming down the line. I take the potential damage that would be caused by a seismic event in the Cascadia subduction zone rather seriously, for instance. But doomsday-friendly as I am, I didn't find the comments of Jim Dobson very compelling. He's the guy who wrote the article with the "doomsday maps."

As Dobson himself admits, the scenarios he rehearses are based on the speculations of "spiritual visionaries and futurists," and are "not based on any science." In fact, these "doomsday maps" are based on a claimed spiritual awakening by one Gordon-Michael Scallion, who has claimed that such a spiritual awakening has helped him create very detailed maps of the future world, coming soon to a continent near you.

The idea that the world may soon change, and in radical ways, does "speak to my condition," to use a Quaker phrase. I have had a hard time, my entire life, believing that the human race can continue pursuing its current course without causing some major and disastrous consequences. That idea about the future (a kind of "doomsday" perspective) is one that I developed as a teenager, and about which I frequently debated my father. He was a very intelligent person, and he pretty much told me that "things have always been like this (i.e., bad)."

I still think we "can't go on like this." At least, not for very much longer. I know that we are always at a critical point in history, that being the essence of our human condition, but I have to think that Bob Dylan is right. It's now or never, more than ever.

It is certainly possible that cataclysmic geologic events will soon be bringing on "doomsday," with maps to match. But so is that kind of "metanoia" I have written about before, a kind of spiritual transformation that could shake the foundations of our world in a transformation that would work for good, and not for ill.

After reading about the "doomsday maps" that word "metanoia" came into my mind once more. It's kind of a religious word. It means "repent." 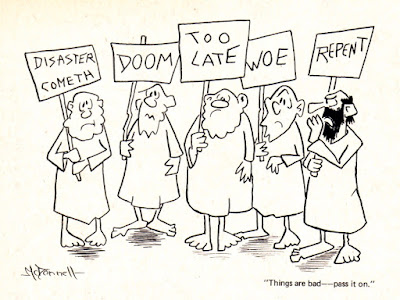