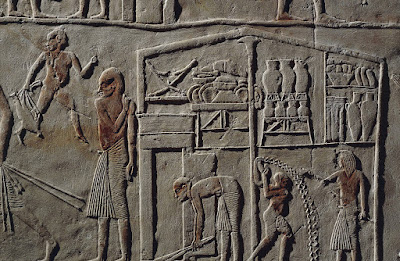 The image above comes from an article in the July 29-30, 2017, Wall Street Journal. The article is called "The Perils of Agriculture" in the print edition of the paper, and "Maybe Cities Were A Bad Idea" in the online version. Most of us, today, would probably think of "cities" and "agriculture" as opposites, but the Wall Street Journal's review of Built On Bones: 15,000 Years Of Urban Life And Death, is correct in linking the two. Without agriculture, we wouldn't have cities. We would be back in a "hunter-gatherer" existence.

Brenna Hassett, author of Built On Bones, lectures in bioarchaeology and physical anthropology at the University of London. The problem she addresses in her book, as described in the Wall Street Journal review, is "one of the most absorbing in the history of the last 14,000 years or so: why, when sedentary ways are obviously destructive of health, have so many people abandoned foraging for farming and rural for urban life?" Why, in other words, are human beings not still operating as hunter-gatherers?

[Hassett] focuses on the evidence of bones, and so psychological sickness and social malaise are under-represented in her tally. But, on most calculations, there is no doubt that farming is bad for you. Populations that adopt it die earlier than hunter-gatherers, exhibiting more stunted and distorted bones, more tooth decay, more exposure to viruses and more evidence of malnutrition than their foraging predecessors. Concentrated populations are accident-prone niches for epidemics, where filth and pollution accumulate, while deprivation ensues from widening inequalities.

Yet farming and urbanization conquered most of the world, with rapidity that, as Ms. Hassett points out, seems astonishing by comparison with the rate of transmission of earlier technological innovations. A way of life that brought “debilitating, spine-crunching diseases” zoomed across the globe during the Neolithic revolution, whereas two-edged flints took perhaps half a millennium to reach Europe from Africa. Populations grow at the expense of individual health and happiness; resources increase, but so do risks of wipe-out.

Felipe Fernández-Armesto, who reviews Built On Bones for the Wall Street Journal, is a professor of history at the University of Notre Dame. Fernández-Armesto suggests that climate change forced pre-urban humans to learn to domesticate plants, with the only other alternative being for them to undertake a radical geographic migration,  "to follow the retreating ice-edge." Fernández-Armesto also notes that "elites" benefitted from the transition to an agriculture-based urban existence, thus suggesting that the sort of "class warfare" that Marx talked about predated the industrial revolution by a very long time.

Here is what struck me in the article. A "hunter-gatherer" existence clearly makes human life directly dependent on a World of Nature that humans did not create. To survive in that world, humans had to acknowledge the primacy of Nature ("the world God made," to put things in a religious context), and if you believe anthropologist James Suzman, author of Affluence Without Abundance, that approach has a great deal to recommend it:

If we judge a civilization’s success by its endurance over time, then the Bushmen are the most successful society in human history. Their experience of modernity offers insight into many aspects of our lives, and clues as to how we might address some big sustainability questions for the future.


In our "urban" and agriculture-based world, it is easy for humans to conclude that they are in charge of their own existence. Harking to my one year of theological education, my Old Testament professor, James Sanders, defined "sin" as the human refusal to acknowledge that we are "creatures," not the Creator; our "sin," in other words, is to attribute our existence to our own human creativity, instead of to the seminal and ultimate creativity of God, who brought everything that is into being.

References to "theology," and to any confession that human beings are subject to the power of a Creator God, are definitely out of favor in today's world. Whether religious language is used, or not, however, is not actually that important, in my view. What is important is whether we can and will acknowledge the truth that the human world that is brought into existence by our own creative activities is ultimately and radically dependent on a World of Nature that we did not create.

Human civilization has had to deal with many "pop quizzes" in its long path to the present, and maybe global warming is going to be our "Final Exam." Our assertion that "we're in charge," generally, has a strange relationship to our approach to global warming. When confronted with the evidence that global warming is, in fact, caused by our human activities, "global warming denialism" questions whether human activities are really the cause of our current crisis. We can't really have it both ways. Human civilization is not going to survive the "Global Warming Final Exam" unless our actual relationship with the World of Nature is first confessed. In the end, we are not "in charge."

We have moved from a "hunter-gatherer" existence, in which the radical dependence of human beings on the Natural World was an evident and everyday fact of life, into an agricultural/urban world of our own making, in which it has become ever easier to forget the ultimate primacy of the World of Nature. That world, the World of nature, the world God made, is the world on which all life depends. We are either going to learn that lesson or fail the final!

As is so often the case, Bob Dylan captures this "Two Worlds" thought in a song. Here is his observation in Mississippi, one of my favorites. This verse perfectly expresses (in metaphor) the transition from our "hunter-gatherer" existence into our current, urban-based civilization:

City’s just a jungle; more games to play
Trapped in the heart of it, tryin' to get away
I was raised in the country, I been workin’ in the town
I been in trouble ever since I set my suitcase down