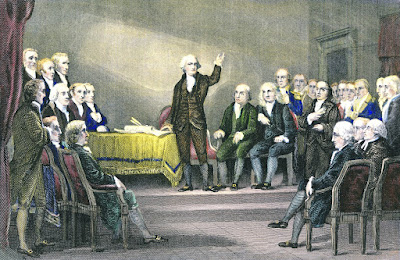 While a shred or a shard of a unifying and patriotic feeling may still remain among us, following our Fourth of July holiday, let me recommend an opinion piece by Michael Gerson, published in the July 2, 2017, edition of The Washington Post. Titled, "America is hacking away at its own democratic limb," Gerson's brief essay urges the following proposition:

Civility and a spirit of compromise were required, again and again, to prevent the Constitutional Convention itself from breaking apart in anger and recrimination. The structure resulted from the virtues. The heroes of the founding were not those who held the strongest views. It was those who held strong views and still found a basis for agreement — frustrating, disappointing, glorious agreement.

Agreement as "glorious?" What a concept! My personal experience in politics has convinced me that "compromise" should never be the "objective" of our political activity. Gerson is correct, however, that after the debate and discussion have taken place, a "decision" must emerge if politics is to fulfill its essential function. I think that coming to a workable and collective "decision" is what Gerson means when he says, "agreement." By its very nature, a "decision" should represent a collective commitment to follow a particular path, and to steer the ship of state in a new direction. Since we are not simply a bunch of individuals, but are in this life together, we do need a mechanism to make decisions about what we, collectively, will do.

If those who lose a particular political debate will never accede to a collective decision that wasn't their first choice, then this will, in fact, eliminate the possibility that our politics can ever succeed.

Democratic decision making is the strong "right arm" of freedom. Let's be sure we don't hack it off by refusing to "make deals," "compromise," and move forward. And let's not try to stifle the speech and debate that we need to have, to inform our decisions before we make them, either!