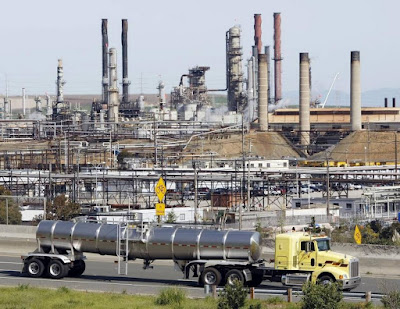 I was an environmental lobbyist in the California State Capitol in 2006, working as the Executive Director of the Planning and Conservation League. That year, environmental organizations focused a major part of their efforts on passing the Global Warming Solutions Act, or AB 32, signed into law by Governor Arnold Schwarzenegger.

The Global Warming Solutions Act of 2006 is now being touted by Governor Jerry Brown, who is traveling the nation, and the world, urging governments, at every level, to confront the global warming crisis that has placed human civilization in peril. Brown has very good reason to promote the Global Warming Solutions Act, because this legislation does demonstrate California's exceptional leadership on global warming. Furthermore, our global warming crisis is real. Immediate action is needed, and Governor Brown should get nothing but thanks for making this clear.

That is not actually true. "Cap and Trade" is the "weakest," and not the strongest way, to fight global warming. Cap and Trade, in fact, is a way to minimize, not maximize, efforts to reduce global warming emissions.

Unlike many laws, AB 32 is easy to understand. It is only thirteen pages long. You can click this link to read the full text. Here is the way the law works:

There is no specific mention of "Cap and Trade" in AB 32. Cap and Trade is a "market-based compliance mechanism," and the ARB is told that it "may" implement such "market mechanisms," as part of its program to achieve the required greenhouse gas emission reductions:

The state board may adopt a regulation that establishes a system of market-based declining annual aggregate emission limits for sources or categories of sources that emit greenhouse gas emissions, applicable from January 1, 2012, to December 31, 2020, inclusive, that the state board determines will achieve the maximum 89 Ch. 488 — 8 — technologically feasible and cost-effective reductions in greenhouse gas emissions, in the aggregate, from those sources or categories of sources (emphasis added).

One of the things I worked hardest to accomplish, in 2006, was to eliminate "Cap and Trade" as a required element in AB 32. The business community was lobbying hard to make Cap and Trade a requirement, because a Cap and Trade program lets businesses that emit greenhouse gases avoid an immediate reduction, mandated by regulation. Instead, the Cap and Trade system allows businesses to "buy" an exemption from regulation, "trading" money for what otherwise would be a regulatory requirement.

While environmental lobbyists were successful in eliminating "market mechanisms" as a requirement in the law, such market mechanisms (Cap and Trade) did come in as "permissive," and the ARB has, in fact, permitted businesses to "buy their way out of regulations" that would otherwise have demanded immediate reductions of greenhouse gas emissions. Cap and Trade will expire in 2020, and Governor Brown is trying to get the Cap and Trade system extended. The Sierra Club, and lots of other environmental organizations, have been raising a red flag about the Governor's current efforts on behalf of the Cap and Trade system. They are warning the Legislature, and the Governor, that the current proposal to extend Cap and Trade "weakens legislative gains made last year in AB 197 by constraining ARB's ability to prioritize direct emission reductions from oil and gas."

Just to be clear, the Legislature is considering legislation that would reduce, not augment, the ARB's ability directly to regulate emissions from facilities like the one pictured above, and to let oil companies, and other businesses, make a money payment instead of having to comply with a regulatory provision that they reduce emissions. This "market-based" approach is the same system that allows developers to provide an "in-lieu" payment to a local government, instead of actually building required affordable housing. It's a "let business off the hook" program. It wasn't any good to begin with, and it isn't any good now.

The fact is, IF we are in the middle of a crisis (and we are), and IF we are serious about reducing global warming emissions (and we ought to be) then we need to get rid of Cap and Trade, and should take the following approach, instead:


If there is a way to reduce greenhouse gas emissions, they need to be reduced, to the greatest extent they can, and as fast as they can, and our regulations should require nothing less.

AB 32 provides the ARB with the authority to carry out such a regulatory program. Cap and Trade is a way to avoid regulations. I think the Governor and the Legislature, if they are sincere about combatting global warming, should forget about "renewing" Cap and Trade. Instead, let's move on from business-friendly "market mechanisms," to a system of regulations that will demand that every possible reduction be made, as soon as possible.

The fate of our human civilization, and the health of the natural environment, is actually at stake!