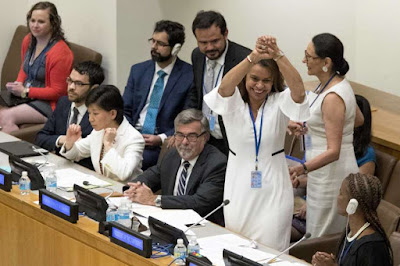 Pictured is Costa Rican Ambassador Elayne Whyte Gomez, president of the United Nations Conference to Negotiate a Legally Binding Instrument to Prohibit Nuclear Weapons. Gomez was reacting to a vote by more than 120 nations to approve the first-ever treaty to ban nuclear weapons.

What did Nikki R. Haley, the American ambassador to the United Nations, say, in explaining our nation's decision not to vote for this treaty? Well, Haley said, "We have to be realistic."

Consider today's posting as a follow up to yesterday's which focused, specifically, on North Korea, and mentioned an important article by Patrick Lawrence. Here is Patrick Lawrence, at length:

﻿The elephant in the room since August 6, 1945, now grows fatter by the day. I refer to ... the illogic of the logic of nuclear weapons ... The world is haunted by these devices because—and at this point only because—those who have them decline to give them up while promising incessantly they want and intend to. Keep them, and others, most of all adversaries, will develop them. China, when we called it “Red China,” was such a case. Pakistan is a more recent example. Iran, faced with Israel’s nuclear arsenal, was due to become another. North Korea is an extreme case, but at bottom nothing more than a variant. We can put a trillion dollars into modernizing our nuclear weaponry, sure. No one can stop us. Do we think there is no consequence? We Americans, in the bubble we have inflated for ourselves and now dwell quiescently within, are far from reality in any number of ways. But are we this far? We have nuclear-armed missiles aimed at Pyongyang and lately let our twitchy fingers show. Now the North tests an ICBM and we hike up our skirts? ...

On this question the sound position is very simple. One must stand opposed to all that makes deterrence a necessity ... When the Security Council convened an emergency session Wednesday, Haley pronounced that Pyongyang’s latest missile launch is “quickly closing off the possibility of a diplomatic solution.” This statement is almost exquisitely upside down. If you can find the logic of it you are a better reader than I.

Well, as Lawrence notes, is there anyone who thinks that North Korea would vote to ban nuclear weapons when the United States, a nation that has them, uses them to threaten North Korea?

It's about time to reconsider the "realism" that is standing around waiting to see who is going to push the button first, and blow up the world.

"Reality" is what we make it. A world without nuclear weapons is just as "realistic" as the world we inhabit now.

But that would be an entirely different world.

I'd say a better one!