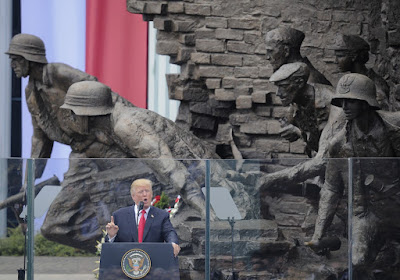 Donald Trump made a speech in Krasinski Square, in Warsaw, Poland, on Thursday, July 6, 2017. According to reporters for The Washington Post,  here is what the President said:

The fundamental question of our time is whether the West has the will to survive. Do we have the confidence in our values to defend them at any cost?

What cost is that, Mr. President? And who bears that cost? And what are those "values" you're talking about, that you think might be lost?

According to The Wall Street Journal, Trump's Warsaw speech was largely the work of political advisor Stephen Miller. As Wikipedia notes, Miller is the guy who "questioned the concept of the Separation of Powers and the role of the judiciary ... and said 'our opponents, the media and the whole world will soon see ... that the powers of the president to protect our country are very substantial and will not be questioned.'"

Will not be questioned, Mr. Miller? Not so fast! I am questioning them right here.

I am questioning what this president is talking about when he suggests there is "no limit" to what those with "courage" will do.

Is our president aiming for a unilateral strike at North Korea, something he has indicated that he might be willing to undertake? Is a nuclear exchange in the offing?

I am questioning all of that, and I am quite nervous about the president's assertion that "our values" must be defended at "any" cost.

Read this essay by Patrick Lawrence, who is a longtime columnist, essayist, critic, and lecturer. Lawrence was a correspondent abroad for many years (writing as Patrick L. Smith), chiefly for the Far Eastern Economic Review, the International Herald Tribune and The New Yorker.

Lawrence is more of an expert on the "East" than our current president, and surely knows more than his constitutionally challenged political advisor. Lawrence's most recent books are Somebody Else’s Century: East and West in a Post-Western World (Pantheon) and Time No Longer: America After the American Century (Yale). His next book is tentatively titled After Exceptionalism. You can learn more about Lawrence by visiting his website. If it's a West versus East confrontation that our current president is talking about, it's probably worthwhile to know about the "East."

Lawrence's essay, which is from a recent edition of The Nation, is titled, "The Unacknowledged Logic of North Korea's Missile Tests." Here is what Lawrence has to say:

﻿ We come to the nub of the North Korea question. The true locus of this conflict lies between Washington and a negotiating table somewhere across the Pacific. It is a fight in defense of American primacy. It is the American policy elite resisting the limits to American power the 21st century imposes even as we speak. In this the confrontation with North Korea—which is at bottom a confrontation with China—ranks with Ukraine and Syria. The three are fundamentally similar in character. As in Europe, then as in the Middle East, so now in Asia: Washington wages rear-guard actions to preserve a prerogative that rests, finally and only, on military might.

I think this is exactly what our current president is talking about, when he talks about defending "our values" at any cost.

If "our values" means American world hegemony, sustained by the threat of nuclear war and military might, then I'm not interested in defending those "values" for even one minute.

This is just an FYI, Mr. President!