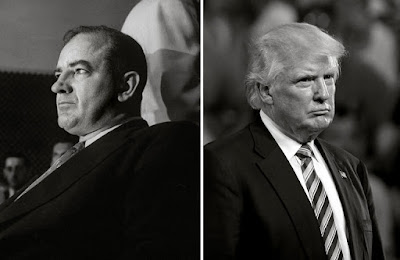 The New York Times ran an article in its Sunday, June 25th edition that made a comparison between President Trump and Senator Joe McCarthy. That is where I found the picture(s) above.

The Times' article highlighted McCarthy's reliance on lies to advance his political objectives, but The Times didn't spend a great deal of effort in pushing the point that our current president seems to have a very similar tendency towards mendacity. Instead, The Times highlighted another similarity between Donald Trump and Joseph McCarthy, and I agree that this is the more important, and more consequential basis for comparison:

Mr. Trump now practices Mr. McCarthy’s version of the politics of fear from the White House. The two figures, who bear striking similarities — and who shared an adviser, Roy Cohn — both mastered the art of fear politics.

Fear politics is killing this country! We are investing our energies, and our resources, in activities that make sense only because we are so "afraid."

Apparently, a 1986 horror film called The Fly was the source of a phrase that seems to sum up the political message that we are hearing from everyone (and not just from our McCarthy-like president):

Be Afraid. Be Very Afraid.

You know, maybe we should just forget about that fear thing! That would mean forgetting about:

It's just that FEAR doesn't really help us to deal with the problems. It actually immobilizes us. We should tell those fears to "fly away home."

And here's a good reminder of how getting together with our friends and neighbors, outdoors, singing along, is probably the best way to escape our fear-filled worries for the future:

I mean it. Staying home, and watching the news, is a prescription for being "afraid." For being "very afraid."

Out in the streets. With friends and neighbors?

A good way to beat the fear factor!