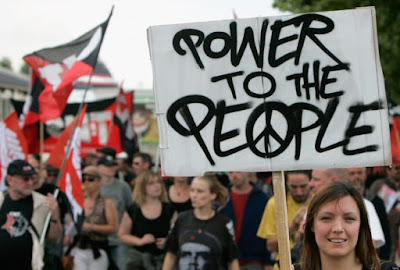 Dave Lindorff is an American investigative reporter. He writes a column for CounterPunch, and is a contributor to Businessweek, The Nation, Extra!, and Salon.com.

Lindorff's recent article, "We need a mass movement to demand radical progressive change," can be found on the Nation of Change website. His article is subtitled, "Is the Democratic Party beyond hope?"

Lindorff doesn't answer that question directly, but he certainly isn't optimistic that the Democratic Party can be transformed:

Clearly to be a viable and genuine opposition party to the ruling Republicans, the Democratic Party would have to be thoroughly deconstructed and rebuilt. The millionaire-packed Democratic National Committee leadership – the lobbyists, the elected officials and the well-heeled donors – would have to be tossed out entirely, and replaced by genuine progressives, labor activists, environmentalists, representatives of various minority groups and (gasp!) socialists. It would need a platform that was unequivocal and unflinching in its call for expanded and more generous Social Security benefits, for a well funded Medicare for All program, for a new National Labor Relations Act that routinizes the forming of labor unions and that safeguards, through severe penalties on recalcitrant employers, the right to bargain for contracts. It would have to stand foursquare for an emergency mobilization against climate change, and it would have to renounce the debunked neoliberal approach of coddling the rich and tossing crumbs to the poor, by standing for much higher taxes on the former and well-funded programs to help the latter. And finally, it would have to call for dramatic cuts in the military (not defense!) budget, and an end to U.S. imperialism and militarism abroad.

Lindorff is also skeptical that any "third party" can step forward, successfully to advance a political program like the one he outlines above:

As the Green Party and various socialist parties over the years have painfully learned, restrictive ballot and media access laws at the federal, state and local level, and a total lack of rules limiting corporate funding of campaigns, put in place by the two big parties, effectively give those two parties a lock on national elections, consigning third parties to the sidelines.

Lindorff concludes that what is needed is a "movement on the streets and in local communities." Such a movement, says Lindorff, "must present the political establishment with the untenable prospect of ongoing mass militant opposition to which it has to respond."

Lindorff argues for a movement that will be broad and inclusive, "built around demands that virtually all Americans, or at least a solid majority, can agree with." Here is Lindorff's list:

The program Lindorff outlines makes me want to ask, "Where do I sign up?" But sign up for what, exactly? That's really the question. Here is how Lindorff sees it all playing out:

I believe that a such national movement, which must be grass-roots, democratic and locally based, if it organized frequent mass actions both in Washington and in the states and municipalities, swarming of Congressional offices both in the capital and in home districts, and pressing candidates during election years, would compel at least the Democratic Party, and perhaps even many Republican office-holders, to act, even if they hold antithetical political views.

The key is to avoid being co-opted by the Democratic Party, and to remain an independent movement.


My own sense is that marches like the one pictured above (this photo taken from Lindorff's posting)  and other "mass actions," are generally NOT "multi-issue" marches and actions, with demands running from cutting military spending to changing the rules for Social Security deductions from upper-income earners.

In fact, single-issues mobilize the crowds. And so do candidates!

Who is running for President (and Congress, and the State Legislature, and local offices) on a platform like the one outlined, above? I think we are going to have to have something more than protests in the street. There will need to be credible candidates, seeking to take power away from those who won't sign on for these kind of changes.