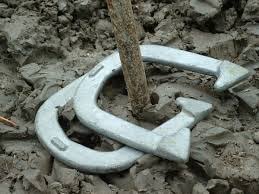 When the media and the press treat politics like a horse race it is called "horse race journalism." Wikipedia describes the practice as follows:

Horse race journalism is political journalism of elections that resembles coverage of horse races because of the focus on polling data, public perception instead of candidate policy, and almost exclusive reporting on candidate differences rather than similarities. For journalists, the horse-race metaphor provides a framework for analysis. A horse is judged not by its own absolute speed or skill, but rather by its comparison to the speed of other horses, and especially by its wins and losses.

I think it is fair to point to the recent House runoff election in Georgia, pitting Democrat Jon Ossoff against Republican Karen Handel, as a good example of the practice. All sides treated the election as a "horserace," and there was lots of betting going on. That election, as it turns out, was the most costly House of Representatives election in history. Most of the contributions came not from the District, or even from Georgia, as partisans from all over the country put their money down on the horse they liked best. Ossoff, for instance, is said to have received nine times as much money from California contributors as from contributors hailing from Georgia, where Ossoff was seeking office.

A story in The Hill, following up on the Handel-Ossoff race, gave me a chuckle. The Hill quoted New Jersey Congress Member Bill Pascrell as follows: “Close is only good in horseshoes." Pascrell is a Democrat, and he definitely wasn't pleased by the outcome of that Georgia election. In a "horse race" election, his horse lost! He was wishing that the election had been some different kind of contest (let's say horseshoes), in which "close" could win.

The Hill's article is worth reading, since it focuses on a big question for the Democratic Party. Is running against our current President the best way to win seats, or do the Democrats need to have some positive program, going beyond being the "non-Trump" alternative?

Granted that electoral politics is not "horseshoes," in which close can be good enough, "horserace"  politics tends focus on personalities, not policy.

I think the Democrats will start getting more "ringers" (that's a horseshoes term) when they have a program and a policy that credibly promises to do something concrete for those not belonging to the 1%.