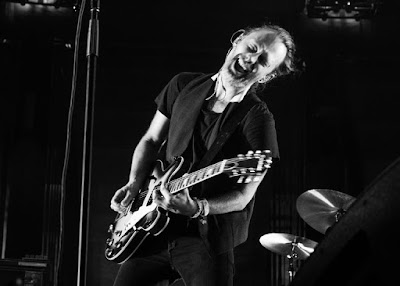 The picture above comes from an article in the June 22, 2017, edition of The New York Times. Music critic Jon Pareles has done an album review of Radiohead's 1997 album, "OK Computer," which Pareles calls "prescient" for having predicted government coercion related to technology, and for having suggested that our newest technologies might result in the surrender of individuality to the "power of the machines."

On the same day, June 22nd, The Wall Street Journal ran an article on driverless cars. Unless you are a subscriber to The Journal, you may not be able to get very far using the link I have just provided, since The Journal has a paywall; however, the point of mentioning the article in The Journal is not, really, to get you to read it. I was just struck, having read The Times' article first, that there could not be a better example of individuals ceding power to "the machines" than the idea that drivers will relinquish control over their own automobiles, letting autonomous systems "drive them," rather than having the owners drive their own cars.

It is taken for granted, sociologically and psychologically speaking, that one incredibly important factor in establishing both the idea and the reality of American "individuality" has been the fact that the individually owned (and driven) automobile provides individuals with immediate access to incredible power and freedom.

And now we're giving that up? What's going on here?

I think something is going on, and that we had better start paying attention. Our growing willingness to replace human beings by "technologies" that are "more efficient," and "work better," is a tendency we need to resist.

Here are a few areas in which technology seems poised to take over from humans (and this is most certainly only a "partial list"):

Every time "technology" is mobilized to replace "human" activity, "capital" is replacing "labor." Those who control capital? The rich. Those who have only their "labor value?" Everyone else. Let's call them the 99%, and as "capital" beats out "labor," those people (most of us, in other words) are being driven ever deeper into poverty.

I suggest that this is the huge, underlying reality that is shaping today's politics. Those who follow politics wonder if the Democratic Party will survive. Well, the Republican Party has pretty much sewed up the "capital" side, and so far, the Democrats aren't really saying that they'll stake everything they've got on "labor."

Why not? Because the individuals within that 99% category, looked at as individuals, don't have very much money, and money is what drives politics. The Democrats, like the Republicans, are "banking" on those with wealth, and then the Party, naturally, must deliver for the wealthy who are funding its efforts. That's the Golden Rule of politics. Those who have the gold make the rules.

So, here's a thought: What about a "People's Party," whose commitment is to stop the transformation that is replacing people with machines and technology? It would have to be funded by the 99%, and to raise the money necessary for success, from all those individual contributors. To be able to raise that kind of money, the new party would have to be credible. This is, of course, what the Bernie Sanders' campaign portended. Reading the paper yesterday, my sense that this is an urgent task was reaffirmed.

Honestly, we can see where it's all going, can't we?

Do we really want a world in which you can't talk to the check out clerk about why it's so hot outside (global warming, you say?), and why you didn't buy the store brand, and in which manufacturing jobs don't exist anymore? Do we really think that "machines" are better than individual people? If all you care about is money, of course, a good case can be made that people are the problem, and that "machines" and "technology" are the solution.

Succumbing to "technology," when it replaces people with machines, is the wrong thing to do, if "human values" are supposed to come first.

Human values are supposed to come first, aren't they?

BONUS ADDENDUM:
If you're not familiar with Radiohead's "OK Computer" (I wasn't), you can listen right here to the songs that Jon Pareles calls "prescient." In the new album, which Pareles was reviewing, the old songs are remastered and some new songs are added.