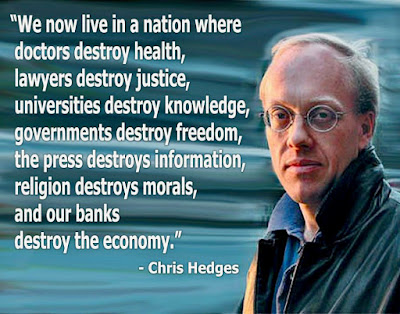 I am quite a fan of Chris Hedges, pictured above, who is a Pulitzer Prize-winning American journalist. He is also a Princeton Professor and a Presbyterian minister.

Hedges' books include War Is a Force That Gives Us Meaning (2002), a finalist for the National Book Critics Circle Award for Nonfiction; Empire of Illusion: The End of Literacy and the Triumph of Spectacle (2009); Death of the Liberal Class (2010); Days of Destruction, Days of Revolt (2012), and his most recent book, Wages of Rebellion: The Moral Imperative of Revolt (2015).

A little more than a week ago, I ran across a May 21, 2017, opinion piece by Hedges, published by TruthDig. His article was titled, "The Death of the Republic." I certainly encourage you to "click through" to Hedges' article, and to read it in its entirety, but just in case you choose not to do that, here is a relatively brief excerpt, which gives you an idea of what Hedges is currently thinking:

Societies that once were open and had democratic traditions are easy prey for the enemies of democracy. These demagogues pay deference to the patriotic ideals, rituals, practices and forms of the old democratic political system while dismantling it. When the Roman Emperor Augustus—he referred to himself as the “first citizen”—neutered the republic, he was careful to maintain the form of the old republic. Lenin and the Bolsheviks did the same when they seized and crushed the autonomous soviets. Even the Nazis and the Stalinists insisted they ruled democratic states. Thomas Paine wrote that despotic government is a fungus that grows out of a corrupt civil society. This is what happened to these older democracies. It is what happened to us.

Our constitutional rights—due process, habeas corpus, privacy, a fair trial, freedom from exploitation, fair elections and dissent—have been taken from us by judicial fiat. These rights exist only in name. The vast disconnect between the purported values of the state and reality renders political discourse absurd.

Corporations, cannibalizing the federal budget, legally empower themselves to exploit and pillage. It is impossible to vote against the interests of Goldman Sachs or ExxonMobil. The pharmaceutical and insurance industries can hold sick children hostage while their parents bankrupt themselves trying to save their sons or daughters. Those burdened by student loans can never wipe out the debt by declaring bankruptcy...

The outward forms of democratic participation—voting, competing political parties, judicial oversight and legislation—are meaningless theater. No one who lives under constant surveillance, who is subject to detention anywhere at any time, whose conversations, messages, meetings, proclivities and habits are recorded, stored and analyzed, who is powerless in the face of corporate exploitation, can be described as free. The relationship between the state and the citizen who is watched constantly is one of master and slave. And the shackles will not be removed if Trump disappears.

I consider this analysis to be rather discouraging! However, I can hardly disagree with what Hedges says, by way of his description of our current situation. Having taught a Legal Studies course on "Privacy, Technology, And Freedom," for instance, I particularly agree with his statement that "no one who lives under constant surveillance...can be described as free."

Granting that Hedges' observations are accurate, however, I want to counter what I think might be an erroneous impression received by the ordinary reader.

"Is" statements present themselves as a description of "fact," or "truth." When "is" statements are believed to be credible (as they usually are, when they are presented by credible persons, like Hedges), they seem to close out discussion. After all, what "is," is what "exists," and what is "real." If we know what is "real," then the description of that reality seems to close out other options.

When Hedges says things like, "It is impossible to vote against the interests of Goldman Sachs or ExxonMobil," ordinary grammar suggests that he means that this statement defines a "reality,"  and that the statement accurately depicts not only what "is," now, but what will always be true. We tend to think that whatever "is," is inevitable.

In the realm of politics, though, and all of Hedges' statements are observations about current political "realities," there is no inevitability to anything.

If we get "discouraged" when we read Hedges' analysis in TruthDig, we are having the wrong reaction to the "realities" he is illuminating.

What we should learn from Hedges is not that what "is," is inevitable, and that the Republic has "died." We need to understand that Hedges' statements outline our situation as it "is now." There is no inevitability to what exists now, within the realm of politics. What Hedges identifies are not the realities that we must accept, but the opposite. These are precisely the "realities" that we can, and must, change.