William (Bill) McGurn, pictured to the right (and that is where he is, politically), is a columnist for The Wall Street Journal.

McGurn's "Main Street" column on June 6, 2017, was titled, "Why Elites Hate." The point of the column was that "identity politics," which is associated for McGurn solely with the Democratic Party, is based on a "baked-in contempt for Middle America."

As McGurn sums up his column: "So good luck with the idea that the Democratic Party can restore its relationship with Middle America without addressing the identity politics that fuels it. Especially when it starts from the premise that the Americans they are condescending to will remain too stupid to figure it out."

McGurn never actually defines exactly what he means by "identity politics," though he gives examples. The Hillary Clinton "deplorables" quote leads the list, and it appears that the key feature of the kind of "identity politics" that McGurn decries is typified by condescension towards those who have different political views, with such condecension then transforming itself into a kind of political aggression against all those who may differ with the condescending Democrats:

When Mrs. Clinton labeled Trump voters deplorable (“racist, sexist, homophobic, xenophobic, Islamophobic, you name it”) she was simply following identity politics to its logical conclusion. Because identity politics transforms those on the other side of the argument—i.e., Americans who are pro-life, who respect the military, who may work in the coal industry—from political opponents into oppressors.

Which is precisely how they are treated: as bigots whose retrograde views mean they have no rights.

I don't think that "identity politics" is a good way to describe the phenomenon that McGurn is writing about. I also disagree with McGurn that the phenomenon he describes is exclusive to the Democratic Party. I think that condescension and contempt, leading to something that comes close to "hate," for those with whom one differs politically, is a typical, almost "default," approach to politics as currently practiced by both the "right" and the "left."

The phenomenon that McGurn discusses, in other words, is a real and accurate description of our contemporary politics and political discourse (again, on both sides of the political spectrum), and that kind of approach to politics profoundly undermines any hope that our democratic (with a small-d) political system can recover itself, and help to maintain a system of self-government in the United States of America.

McGurn cites to an interview between Hastings law professor Joan C. Williams, whose latest book is called, White Working Class: Overcoming Class Cluelessness in America and Isaac Chotiner, a staff writer at Slate. Here is one of Chotiner's questions to Williams:

But as for people like us, we should have some commitment to honesty. What attitude should we be taking toward people who voted for a racist buffoon that is scamming them?

Slate and McGurn are both addressing their comments to those they have identified as "people like us."

We had better work harder to escape this black hole of political discourse. If we don't, our politics will be crushed even further into lifelessness. 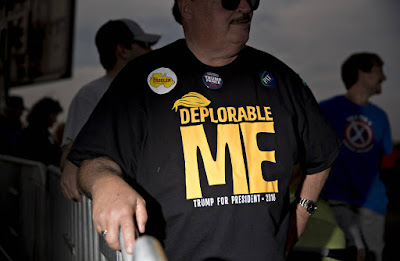