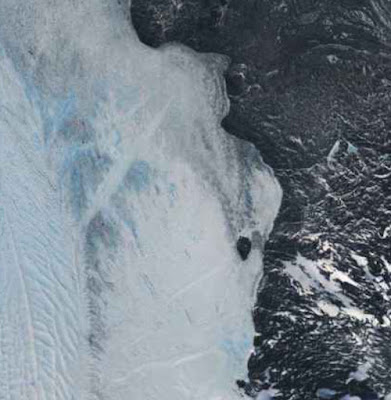 The New York Times has published a three-part series on global warming, focusing specifically on the way that global warming is manifesting itself in the Antarctic. The series is called, "Antarctic Dispatches."

The Times states, with a kind of chilling detachment, exactly what ought to be obvious to us all. We live, most immediately, in a "human world," and that world, our human civilization, is ultimately and radically dependent upon the World of Nature. The inherent stability of the Natural World is something that we have always taken for granted. In fact, however, and now more than ever, the World of Nature, following its own laws, is rapidly changing in response to what more than 7.5 billion human beings are doing.

This is what The Times said, in its print edition of Part I of its Antarctic Dispatches:

Antarctica, an immense frozen land, is hiding many [secrets]. And some scientists are starting to think that nothing less than the fate of human civilization may hang on unraveling those mysteries.

Without disputing what "some scientists ... are starting to think," the fate of "our" world, not the World of Nature, will depend not only on our ability to "unravel the mysteries," and to know how Nature is responding to what human beings are doing; more importantly, the fate of our world will depend on the actions we take in response to the knowledge we gain.

What we "do" is going to be more important than what we "know," as these mysteries of Nature are disclosed, and as it becomes ever more obvious how Nature is being transformed, in response to what we ourselves have done.