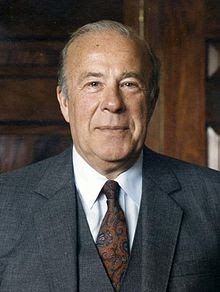 Pictured is former United States Secretary of State George P. Schulz. After serving as Secretary of State, Schulz served as a member of the Board of Directors of Theranos, Inc. There seems to be some considerable evidence that Theranos was a company engaged in a financial scam.

Wall Street Journal reporter Christopher Weaver has written a number of articles about the company, which claimed to have developed a revolutionary new technology for taking blood samples. Weaver's most recent article, which appeared in The Wall Street Journal on Wednesday, May 31, 2017, said this in its two lead off paragraphs:

Two former Theranos Inc. directors said they didn’t follow up on public allegations that the Silicon Valley blood-testing firm was relying on standard technology rather than its much-hyped proprietary device for most tests, according to newly released court documents.

In depositions, the highly decorated former directors—former U.S. Navy Adm. Gary Roughead and former U.S. Secretary of State George Shultz —who were board members when concerns of employees and regulators became public—said they didn’t question Theranos founder Elizabeth Holmes about the matter.

Schulz was specifically quoted as saying that he "didn't probe into" whether the company's technology was working, adding: "It didn't occur to me." This is, actually, both alarming and all too common.

In this case, though, Director Schulz said that "it didn't occur to me" to question corporate management, even when responsible sources, like The Wall Street Journal, were suggesting that the company was "faking" what it did.

Unfortunately, it is not uncommon for those with ultimate responsibility to defer, unquestioningly, to the paid managers they have hired, when questions are raised about what those paid managers are actually doing. It happens in government, too, not just in the corporate world.

Recently, the City of Santa Cruz has embarked on a "Corridor Rezoning" process that seems to be aimed at turning the City's four main transportation corridors into valleys of high-rise, "mixed-use" commercial and residential structures something like what you'd see in San Jose.

As residents have found about this, they have become increasingly alarmed that a huge shift in the shape and character of their local community is being proposed, and large numbers of residents have come to the last two meetings of the City Planning Commission to protest. The kind of transformation that they fear is illustrated below, comparing the current "Buttery Corner," at the intersection of Branciforte and Soquel Drive, to a simulation of what the scale of the buildings that could replace the current structures would be like, if the corridor rezoning plan is enacted as currently proposed: 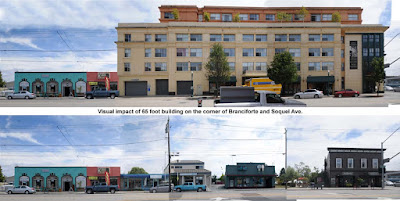 Concerned residents have formed a new community group, Save Santa Cruz, to try to get this corridor rezoning process under community control, and to "Stop Overbuilding Santa Cruz." The very first suggestion of Save Santa Cruz was that the City Council should get involved, even though the current process doesn't call for that, so the Council could evaluate for itself what is happening.

The City's Planning Staff and consultants want to carry out this process without any City Council involvement at this time, telling the Council that things are going well, and that the end result, coming early next year, will be everything that the Council could ever want.

From my perspective, having had twenty years as an elected official in Santa Cruz County government, this is the point at which the Council should intervene, and hold some meetings to get some direct testimony from the public, rather than relying simply on what their management staff is telling them.

The City, in other words, should not be following the example of George P. Schulz, who "didn't probe into" the complaints that were being made about the organization for which he was responsible. Somehow (although that was his job), it didn't occur to Schulz to see if the complaints were valid.

I'm hoping that the Santa Cruz City Council doesn't make the same mistake, where this Corridor Rezoning process is involved.