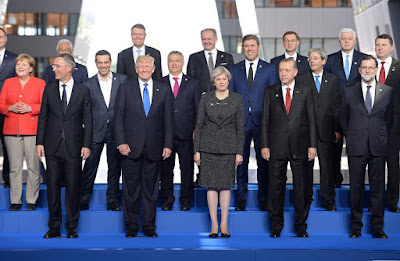 The picture above graces a Wall Street Journal piece authored by Lieutenant General H.R. McMaster and Gary D. Cohn. The Journal identifies McMaster as the White House national security adviser. Cohn is listed as the director of the National Economic Council.

As Wikipedia notes, the National Economic Council is "the principal forum used by the President of the United States for considering economic policy matters." Not mentioned by The Journal is that Cohn is also the president of Goldman Sachs. In other words, the "principal" financial and economic advisor to our supposedly "populist" president heads up the Wall Street firm most closely identified with the catastrophic financial meltdown of 2008, in which millions of Americans lost their homes and their life savings, while Goldman Sachs did just fine.

The McMaster-Cohn column was titled, "America First Doesn't Mean America Alone." The column argues that the president's recent trip to Saudi Arabia, Israel, and Europe was a diplomatic triumph, though you won't get that impression from reading what other commentators had to say about that trip:

For Trump, like other presidents—Richard Nixon most notably—foreign travel may have seemed an escape from domestic troubles. But like Evita’s Rainbow Tour, such junkets end sometime, yielding no result save to show us, yet again, how little there is beneath the façade of this paper mâché presidency.

David Brooks, the New York Times columnist, has also written about what McMaster and Cohn said in their Wall Street Journal review of the Trump world tour. Brooks titled his column on this subject, "The Axis Of Selfishness," in the printed version, and "Donald Trump Poisons the World" in the online version. The Atlantic also took exception to the claims made by McMaster-Cohn, calling the Trump foreign tour, "The Death Knell for America's Global Leadership."

I do invite interested persons to read what McMaster and Cohn have to say. Just click that link.

Then, I invite those who have read the McMaster-Cohn article to indulge me in a new acronym, one I just made up: NBTB.

Nobody Believes This Bullshit.