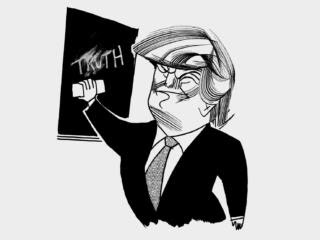 I am quite a fan of Jill Lepore, a history professor at Harvard and a frequent contributor to The New Yorker. Lepore's recent Comment in The New Yorker's "Talk Of The Town" section was titled, "The Strategy Of Truth." At least, that is the title used in the print edition of the magazine, a copy of which I received yesterday. The title of the online version is somewhat different, but the column itself remains the same.

The point of Lepore's New Yorker Comment is that both Donald Trump and Roger Ailes have helped destroy our nation's confidence that there is anything even resembling "truth" in the realm of politics. And as Lepore properly says, "It is not always possible to sort out fact from fiction, but to believe that everything is a lie is to know nothing."

Along the way to her conclusion, Lepore cites to Archibald MacLeish, and particularly to his poem called "Brave New World."

Reading the Lepore Comment is "worth it," in my opinion, if for no other reason than to read what MacLeish has to say about "freedom."

Freedom that was a thing to use
They've made a thing to save
And staked it in and fenced it round
Like a dead man's grave.