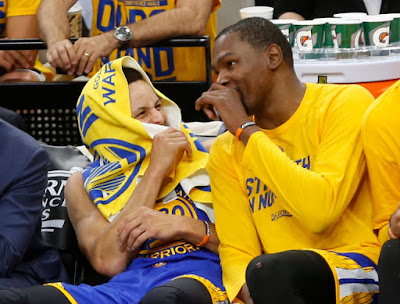 Tonight is the first game in the National Basketball Association 2017 playoffs, with the Golden State Warriors, Western Conference champions, facing off against the Eastern Conference championship team, the Cleveland Cavaliers, in a best of seven series. The first game of the NBA Finals starts tonight at 5:30 in the Oracle Arena. This being so, it's probably a good time to revisit an article in the May 21, 2017, New York Times: "Democracy, It Turns Out, Suits the Warriors Just Fine."

The Times' article, written just before the Warriors put away the San Antonio Spurs, to win the Western Conference championship, focuses on the "sacrifice" and the "lack of selfishness" of the Warriors' players, including specifically two of their very best players, Steph Curry and Kevin Durant, pictured above.

Not to disagree with what The Times' article says, because observations about the "unselfishness" of the Warriors' players is demonstrably true, I'd like to suggest that the kind of "democracy" that The Times is touting does not depend, at least not only, on some kind of personal "selflessness." Again, that kind of personal selflessness and willingness to sacrifice individual glory for a team triumph is definitely something worth striving for, but not because we would all like to be thought of as self-sacrificing and selfless. Besides simply appealing to a "higher morality," there are some very "pragmatic" reasons to build a "democratic" team.

Players don't have to be "saints," in other words, exhibiting St. Francis-like personal characteristics, for the "democratic" model to come out on top. In fact, a genuine "team," one that operates collectively and cooperatively, as opposed to operating as a collection of individual players, is always going to be stronger in the long run than a collection of even truly great individual players.

When the "democratic" model is deployed, it is the "team," the collectivity, that must mobilize its will and talent to win. When Kevin Durant goes out with an injury, the team goes on to win anyway. When Steph Curry turns "cold," the Warriors still prevail.

As in basketball, so as in our politics. Our highly visible, and talented political "superstars" are not the ones who make democracy work. In the long run, it's all of us, when we do collaborate and act as a "team."

To be a "team," though, you do have to practice as a team. That's true for the Warriors, and it's true for all of us, as we consider the daunting political realities that face us now.

Democracy, I think, will continue to "suit the United States just fine," when we start practicing it once again.